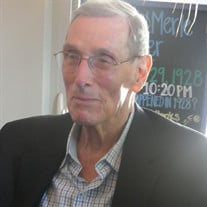 Donald Merle Palmer, age 90, passed away on Thursday, July 25 at Memorial Hermann Memorial City Medical Center in Houston, Texas following a brief illness. He leaves his wife of 68 years, Mary Ann (Morris) Palmer; his son, Donald Palmer Jr. and his wife, Linda Habermas; his daughter, Melanie (Palmer) Mitchell; his three brothers, Gerald, Dan, and Barry Palmer; his grandchildren, Trey Palmer, Drew Mitchell and Julika Kaplan, Matt Mitchell, Kyle Mitchell, Dani and Mark Camilli, Neil and Justine Crumpton; and his great-grandchildren, Trenton and Reilyn Crumpton. He was born in Boling, Texas on November 29, 1928 to Ollie Marie Palmer and Boone Palmer. He grew up in Freeport, Texas and went to Freeport High School. He joined the Air Force at age 17 and ultimately became a Staff Sergeant. He received his Bachelor of Science, Bachelor of Architecture, and Master in Architecture degrees at the University of Houston. He married Mary Ann Morris on November 22, 1950 in a small country church in West Columbia, Texas. Don spent his career working as an architect, first for Howard Barnstone while in college and after graduation, and then for Kenneth Bentsen. Following 23 years of experience, he joined Morris/Aubrey in 1979 where he became Partner. He retire from Page Southerland Page and continued to work as an independent on individual contracted projects until he was 86. His architectural and interior design projects included many hospitals and libraries, but some of his favorite projects were the Spartanburg County Public Library in South Carolina with Maurice Sendak, Braniff Airlines Headquarters in Dallas with Sally Walsh, the Wortham Theater for the Performing Arts, Amoco Production Company in Houston, and Texas Children's Hospital in the Texas Medical Center. He also won many awards in his field, such as the "Top Interiors in Health Care Award" in 1997 and 1998, the "ASID Interior Design Award" in 2005, and the "ASID/Houston Chronicle Award" in 1997. The most important parts of Don's life were family and faith. He had special relationships with each of his children, grandchildren, and great-grandchildren. He was the strong, humble, silent leader of the family and a model husband, son, father, and grandfather. Don and Mary Ann joined Berachah Church as a young married couple, and he was a devoted student of the Bible for over 60 years. Don enjoyed reading non-fiction books, cheering on the University of Houston basketball and football teams, and his evening glass of wine. He was dedicated to exercising, walking and even doing push-ups at age 90. After his love of Faith and Family, his two greatest passions were Painting and Classical Music. He developed into an accomplished artist creating dozens of beautiful paintings. Don was loved deeply by his family and friends and will be dearly missed. We are comforted knowing that he is with our Lord and Savior, and have the assurance of reuniting with him in eternity. A Memorial Service will be held Tuesday, July 30, 2019 at 11:00 AM at Berachah Church, 2815 Sage Road, Houston, TX 77056. In lieu of flowers please consider contributions in Don's memory to the Berachah Church and Star of Hope Mission at https://www.sohmission.org/ways-to-give/

The family of Donald Merle Palmer created this Life Tributes page to make it easy to share your memories.

Send flowers to the Palmer family.