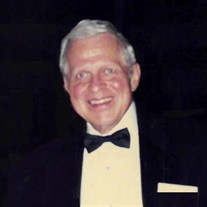 Donald P. Sobocinski (Don) passed away peacefully on Monday, July 30, 2018. Don was born on Palm Sunday, April 1930, to Stanley and Anne Sobocinski in North Tonawanda (NT), New York. He was preceded in death by his parents, his only son, Douglas Dean, by his sister, Donna Marie Smith, and by his brother, Dr. Robert Sobocinski. He is survived by his wife of 65 years, Joan; daughters, Deborah Pearson and husband Steve, Roxanne Sharrock and husband Stuart, and Lisa Rapier and husband Douglas. Don is also survived by nine grandchildren: Lane (Ashley), Chad (Sarah) and Dean (Randi)Pearson; Matt (Traci), Glen, Lee and Audrey Sharrock; Rachel and Renee Rapier; great grandchildren, Everette, Adalyn, Kaylee, Grant and Charlotte. Other survivors include his brother Dr. Lawrence Sobocinski and numerous cousins, nieces, and nephews. Don attended Catholic School through the eighth grade. Then he attended NT High School where he lettered in track and football, was class president, and graduated as valedictorian. Don entered the University of Oklahoma (OU) in 1948. He earned his "letter" in track, was part of the ROTC program, was named BMOC, was a member of Beta Theta Pi fraternity, and graduated in Chemical Engineering. It was also at OU where Don met Joan Burr Forck. They fell in love and married late in 1952. After receiving his military commission, Don was assigned to White Sands Proving Ground in New Mexico. There he worked mostly on missile propulsion systems. After his assignment at White Sands was completed, Don returned to OU where he received a fellowship and earned a master's degree in chemical engineering. Then, Don went to the University of Kansas, received another fellowship and earned his PhD, also in chemical engineering. Late in 1958 Don accepted a research position in Tulsa with what is now ExxonMobil; soon he moved with the company to Houston. Don worked mostly in reservoir engineering and soon was planning, directing and presenting studies about new field developments and changes needed in mature fields. He also consulted with exploration personnel about engineering aspects of new properties. Don was principal author and editor-in-chief for an in-house publication on reservoir engineering. He spent two years in Saskatchewan as acting division reservoir engineer. With all this experience, Don spent several decades during which he consulted/lectured in various parts of the world, often for 60-90 days every year. He was known for his essentially note-free, fresh lectures during which he encouraged and received much discussion. He was awarded over 40 plaques as outstanding lecturer. Don retired in 1992, but continued to consult for another ten years. Don enjoyed a variety of activities, especially those in which the family was involved. He liked all kinds of fishing, traveling, tennis, sailing, dancing, landscape painting, and genealogical/historical studies of his family. Don was a member of the American Institute of Chemical Engineers, the Society of Petroleum Engineers, was a past president and current member of the ExxonMobil retirement group (MAC) in Houston, Sigma Xi Scientific Society, St John Vianney Catholic Church, the OU Letterman's Assn., dance clubs, and the Polish Genealogical Society of Texas. Above all, Don was a man of great faith who loved his church and his family. He was loved by those who knew him and will be greatly missed. The Sobocinski family will be present to receive friends Thursday, August 2, 2018 from 6:00 PM until 8:00 PM with the recitation of the Holy Rosary at 7:30 PM at Dettling Funeral Home, 14094 Memorial Drive, Houston, TX 77079. The Funeral Mass will commence Friday, August 3, 2018 at 10:30 AM at St. John Vianney Catholic Church, 625 Nottingham Oaks Trail, Houston, TX 77079. A reception will follow Holy Mass on the church campus. Visit www.DettlingFuneral.com to leave words of condolence for the family.

Donald P. Sobocinski (Don) passed away peacefully on Monday, July 30, 2018. Don was born on Palm Sunday, April 1930, to Stanley and Anne Sobocinski in North Tonawanda (NT), New York. He was preceded in death by his parents, his only son, Douglas... View Obituary & Service Information

The family of Donald Paul Sobocinski created this Life Tributes page to make it easy to share your memories.

Send flowers to the Sobocinski family.