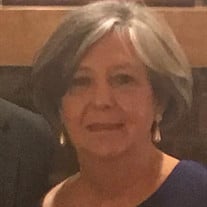 Donna Bowles Talbot, 68, of Houston passed away Tuesday, November 21, 2017, after a courageous battle with cancer. She was born January 18, 1949, in Oxford, Mississippi to James “Preacher” and Annie Bowles. She is preceded in death by her parents and her brother, Ronnie Bowles. Donna is survived by her husband, Rick Talbot; sons, Josh Talbot and Matt Talbot; her granddaughter, Suzannah Talbot; sisters, Cathy Taggart and Brenda Newberry; nieces and nephew, Shelley Hidabrader, Courtney Brock, Jackie Taggart and Chase Newberry; and extended family. Donna began her life as a southern girl; born in Oxford, grew up in Water Valley, Belzoni and Nashville. When she was in junior high her parents moved to Houston where she spent the rest of her life. Donna graduated from Lee High School in 1967 then attended college at Texas Tech where she met her husband of 47 years. She finished college at the University of Houston earning a degree in Journalism while working as a reporter and an editor on the Daily Cougar. She later returned to U of H to pursue her graduate studies. Donna began her career in writing/editing and public relations with the Houston Symphony. She worked for several well known firms including Schlumberger, AIG Valic and Baker Botts in Houston. People who knew Donna knew her as a good wife, a good mother and a good friend. Donna was a kind, gentle and caring person. She always had that positive outlook that served her well during her eight year long fight with cancer. She enjoyed travelling, cooking, playing bridge and mahjong and spending time with her friends and family. Donna devoted herself to raising her two sons and being there for her granddaughter. She was deeply loved by those who knew her and will be greatly missed. The Talbot family will be present to receive friends, Thursday, November 30, 2017 from 6:00 PM until 8:00 PM with a Rosary being recited at 7:00 PM at Dettling Funeral Home, 14094 Memorial Drive, Houston, TX 77079. The funeral mass will commence Friday, December 1, 2017 at 3:00 PM at St. Catherine of Siena Catholic Church, 10688 Shadow Wood Drive, Houston, TX 77043. A reception will follow Holy Mass on the church campus.

Donna Bowles Talbot, 68, of Houston passed away Tuesday, November 21, 2017, after a courageous battle with cancer. She was born January 18, 1949, in Oxford, Mississippi to James &#8220;Preacher&#8221; and Annie Bowles. She is preceded in death... View Obituary & Service Information

The family of Donna Bowles Talbot created this Life Tributes page to make it easy to share your memories.

Send flowers to the Talbot family.