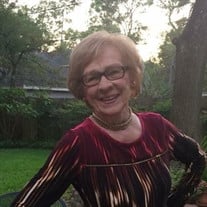 Dorothy L. Bayer, 92, of Houston passed away Friday, February 16, 2018. Mrs. Bayer was born November 6, 1925 in Covington, KY to Harry and Eleanor Lahm. Dorothy is survived by her husband of 68 years, William Bayer; children, William Bayer, Jr. & wife Emilia, Barbara Hassig & husband Edward, Jeff Bayer & wife Chris, Amy Beale and husband Paul. She also leaves 9 grandchildren, 8 great grandchildren and her brothers, John and Herb Lahm as well as numerous nieces, nephews and extended family. Dorothy was raised in the Covington, KY area where she met the love of her life, Bill. The couple was married in 1949 and started their family. Mr. Bayer’s work in the grocery business moved the couple numerous times until they settled in Houston in 1965. They spent the remainder of their time in Houston where they raised their four children. Dorothy was a founding member of St. John Vianney Catholic Church where she was a longtime volunteer at St. Joseph’s Coat and member of the Women’s Club. She remained active in the parish until just weeks ago. She also volunteered at St. Joseph’s Hospital and Memorial Hermann, Memorial City Hospital for many years as a “Candy Striper” in the Women’s Auxiliary. Dorothy enjoyed sewing, reading, crafts, cooking, gardening and traveling. Of all the wonderful accomplishments in her life, her greatest love was her family. Spending time with her children, grandchildren and great grandchildren was paramount in her life. She was loved by those who knew her and will be greatly missed. A Funeral Mass celebrating Dorothy’s life will be held Wednesday, February 21, 2018 at 10:30 AM at St. John Vianney Catholic Church, 625 Nottingham Oaks Trail, Houston, TX 77079. A reception will follow Holy Mass in St. Jude Hall on the church campus. Mrs. Bayer will be laid to rest in VA Houston National Cemetery in a private family ceremony. In lieu of flowers please consider contributions in Dorothy’s memory to St. Joseph’s Coat at St. John Vianney Catholic Church.

The family of Dorothy L. Bayer created this Life Tributes page to make it easy to share your memories.

Send flowers to the Bayer family.