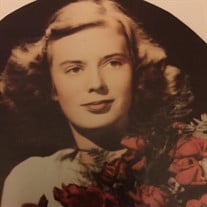 Dorothy Stanford Luongo of Houston, Texas passed away in Hospice Care on March 4, 2016. Dorothy was born in Atlanta, Georgia to Clarence Alfred Stanford and Evelyn Baker Stanford on June 4, 1928. She was preceded in death by her husband, Claude Eugene Jones in 1994 and her second husband, Joseph Luongo in 1995. She is survived by her two daughters, Karyn Jones Enriquez and Ellyn Patricia Jones; son-in-law Karl Lehenbauer; granddaughter Carolyn Leggett and her husband, Eric Leggett; granddaughter Emily Mustard; grandson Michael Enriquez and his wife, Kelly Enriquez; and great-grandchildren Henry, Madison, Mia, and Tristen. Dorothy graduated from Girls High School in Atlanta, Georgia in 1946 and from the University of Central Florida in 1974 with a Bachelor of Fine Arts degree. She was a homemaker and mother and an accomplished graphic artist specializing in drawing and painting. She was a cadet in the Civil Air Patrol during World War II and a member of the Atlanta Youth Symphony during her high school days as well. She had a great love for music and loved to dance – particularly to the Big Band sounds of the 1940s. She enjoyed SCUBA diving and running and long nature walks and storytelling with her children and grandchildren. She enjoyed gardening and raised beautiful orchids. She loved animals and many cats and dogs found their forever home with her. She was an active member of the Episcopal Church and served on the Library Guild at All Saints Episcopal Church in Winter Park, Florida and as Church Historian at Trinity Episcopal Church in St. Charles, Missouri. She and her husband, Claude Eugene “Gene” Jones participated in the civil rights movement in Atlanta in the late 1950s, which stopped the Governor of Georgia from closing the Atlanta public schools as a refusal to desegregate. She was gentle, kind, funny, and courageous. She taught her children and her grandchildren to enjoy life, to laugh often, love well, have compassion for others, and to have fun. She loved pink, blue, and yellow; chocolate; Hepburn and Tracy; Peter O’Toole; Jack Benny and Red Skelton; and swooned to the voice of Frank Sinatra. She lived a full rich life and was well loved by her family and many, many friends. She will be missed by all of them. Her family and friends like to think she is dancing with “Gene” and playing with her animals, unfettered by any pain or sorrow. We will continue to celebrate her amazing life. A memorial service will be held at 7:00 PM on March 22, 2016 at Dettling Funeral Home 14094 Memorial Drive, Houston, TX 77079. In lieu of flowers, the family requests that contributions be made to the Humane Society, the ASPCA, or to Buckner Hospice, 11111 Katy Freeway, Suite 620, Houston, Texas 77079.

Dorothy Stanford Luongo of Houston, Texas passed away in Hospice Care on March 4, 2016. Dorothy was born in Atlanta, Georgia to Clarence Alfred Stanford and Evelyn Baker Stanford on June 4, 1928. She was preceded in death by her husband, Claude... View Obituary & Service Information

The family of Dorothy Stanford Luongo created this Life Tributes page to make it easy to share your memories.

Dorothy Stanford Luongo of Houston, Texas passed away in Hospice...

Send flowers to the Luongo family.