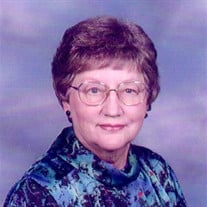 Dory H. Graham, of Houston, TX died December 24, 2017 at the age of 88. A memorial service will be held at 11:00 a.m. on Monday, January 8, 2018 at Memorial Drive United Methodist Church, 12955 Memorial Drive, Houston TX, 77079. Dory was born May 19, 1929, in Charlotte, North Carolina to William V. and Dorothy Clark Heldreth. Her early years were spent in Lexington, Illinois and Toledo, Ohio, before moving to Ann Arbor, Michigan in 1941. In high school, many of her activities involved music, such as singing in the Contendo Choir and Girls Glee Club, and playing piano accompaniment for both choirs. As a member of the Rifle Club, she earned Sharpshooter rank. She was a member of the Girls Athletic Club, the Optimist Staff (newspaper) and the Omega Staff (yearbook). She served on the Executive Committees for the Sophomore Class and Junior Class, and was Secretary of the Senior Class. Dory was President of the Washington Club during her senior year, travelling to Washington, D.C. to tour the nation’s capital, including a tour of the FBI conducted personally by J. Edgar Hoover. She also wrote a column about high school activities for a local weekly newspaper published in Ann Arbor. Dory attended the University of Michigan in Ann Arbor, and received a B.S. in Education and a Teacher’s Certificate in 1953. She also studied music, and was a member of the Music Fraternity Sigma Alpha Iota. On April 10, 1950 she married Garrett R. Graham, her best friend and soul mate. She was a devoted wife and mother, always putting her family’s needs before her own. She had a smile for everyone she met. Dory enjoyed cross country travel to see family, and always appreciated the natural beauty along the way. She particularly loved clouds and sunsets, as well as beaches, lighthouses, water, and boats. Kemah, Texas was a favorite place where she could experience them all. She also loved to decorate, and frequently incorporated in her home items she acquired during her travels. The family lived in Ann Arbor, Allen Park, and Saginaw, Michigan; Portland, Indiana; Pittsburgh, Pennsylvania; and Indianapolis, Indiana, prior to moving to Houston in 1970. Dory taught elementary school in Indianapolis, and taught for 15 years in Houston at Sherwood Elementary School in Spring Branch ISD. Dory was a member of Memorial Drive United Methodist Church for 47 years, was an active member of the Bridgebuilders Sunday School Class, and for many years was a member of the Chancel Choir. She was an active participant of the United Methodist Women of MDUMC, especially the Reading Circle and Common Thread Circle. Dory was also a member of the Daughters of the American Revolution. She is survived by her husband of 67 years and their four children: Garrett H. Graham of Houston; Andrew Graham and wife Laurie of Spicewood, Texas; Gail Cline and husband Charlie of Houston; and Amy Sigler of Cottonwood, Idaho; and their seven grandchildren: Michael Graham and wife Traci of Norfolk, Virginia; Matthew Graham and wife Kathryn of Renningen, Germany; Nathan Stinson of Lewisville, Texas; Daniel Sigler and wife Shelbie of Cottonwood, Idaho; Garrett P. Graham of Houston; David Sigler and Megan Sigler of Portland, Oregon; and their four great-grandchildren: Rebekah, Hannah, and Joshua Graham; and Lincoln Sigler. She is also survived by her sister, Mrs. Joan Bell and husband Dale of Suttons Bay, Michigan, as well as numerous nephews, nieces and cousins. Memorials may be made to The Caring Forever Fund at Memorial Drive United Methodist Church.

The family of Dory Heldreth Graham created this Life Tributes page to make it easy to share your memories.