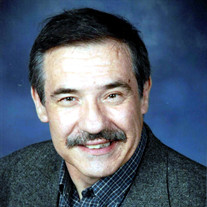 Douglas Paul Balla, 59, of Katy, TX passed away after a brief illness Saturday, September 9, 2017. Doug was born February 13, 1958 in Euclid, Ohio to Peter and Dorothy Balla. He is preceded in death by his father and is survived by his loving wife of 33 years, Laura M. Balla; his mother Dorothy M. Balla; and his sister, Kathleen S. Hendrick. Doug is uncle to Lyndsey, Allison, Kyle, Emily, April and Charles and great uncle to Levi, Lila, Jackson, Damon and Luke. He also leaves many good friends that will remember him fondly. Doug grew up in the East lake Ohio area and attended East Lake North High School. He received a certificate in welding from Lincoln Electric Welding School in Cleveland before leaving Ohio for Texas in 1981 with the love of his life, Laura. He had a long career as a tool repair technician working for such prestigious firms as Porter Cable and Makita Power Tools. Doug was an accomplished Ham Radio Operator with the Handle- KD5VDH. He enjoyed the outdoors, kayaking, fishing, motorcycling and bicycling. His favorite times were camping with Laura; spending time in parks and reserves all over North America. Mr. Balla was a man of great faith. He was an active member at St. John Vianney Catholic Church in Houston where he was on the RCIA Core Team, a Eucharistic Minister of Holy Communion and spent every Friday volunteering at Joseph’s Coat at the parish. He was loved by those of us who were honored to know him, he will be greatly missed. The Balla family will be present to receive friends Wednesday, September 13, 2017 from 6:00 PM until 8:00 PM with a Vigil Service beginning at 7:00 PM at Dettling Funeral Home, 14094 Memorial Drive, Houston, TX 77079. The Funeral Mass will be celebrated Thursday, September 14, 2017 at 10:30 AM at St. John Vianney Catholic Church, 625 Nottingham Oaks Trail, Houston, TX 77079. A reception will follow Holy Mass on the church campus. Doug will be laid to rest in Crown Hill Cemetery in Twinsburg, Ohio at a later date.

Douglas Paul Balla, 59, of Katy, TX passed away after a brief illness Saturday, September 9, 2017. Doug was born February 13, 1958 in Euclid, Ohio to Peter and Dorothy Balla. He is preceded in death by his father and is survived by his loving... View Obituary & Service Information

The family of Douglas Paul Balla created this Life Tributes page to make it easy to share your memories.

Douglas Paul Balla, 59, of Katy, TX passed away after a brief...

Send flowers to the Balla family.