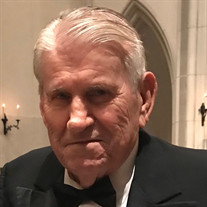 Douglas W. Potts, 86, of Houston passed away peacefully at home Sunday, October 13, 2019 to join his wife Nedaye, who passed away one year ago in September 2018. Douglas was born November 27, 1932 in Evergreen, Alabama to Lottie and Andrew Potts. He is preceded in death by his parents, two brothers, a sister, and his wife. He is survived by his daughters, Allison Potts Anderson and Andrea Potts Snoddy and her husband, Jim, grandchildren, Mary Stewart Clark and her husband Cotton, John Douglas D’Angelo, and Addie Anderson Winslow and her husband Luke, great-grandsons, William and Benjamin Winslow. He is also survived by his sisters, Barbra Potts Kamburis and Marilyn Potts Reeves, sisters-in-law Linda Chambliss and husband Harold, Lani Gray Vanblankenship, as well as many beloved nieces and nephews. Doug grew up in Evergreen, Alabama and served in the National Guard during the Korean War where he played Service Football, before going to University of Alabama to play three years of football. It was at University of Alabama where Doug met the love of his life, Nedaye Eppes Gray. They were married 62 years. He had a great love for his Crimson Tide Alabama Football team and served as President of the “A” Club there. After graduating, he followed Nedaye to Houston where he worked in the Concrete Pipe Industry for 60 years as owner of several pipe companies; he continued to sell concrete pipe until 2017. He loved his family, hunting with his bird dogs, and entertaining at great places he built in South Texas and Matagorda. He loved nothing more than to entertain family and friends. Douglas served as a Director for the Houston Livestock Show and Rodeo for many years, as well as Chairman of the Steer Auction Committee where he put together the first consortium ever to purchase the Grand Champion Steer at HLS&R; this began the trend for consortiums to purchase the Grand Champion animals to help raise money for numerous college scholarships. The family has so much appreciation and love for his caregivers, Cathy Alvarez, Daniel Yapez, and Roshandra Hogan, who provided so much love and support. ROLL TIDE ROLL!! A Memorial Service will be held Monday, October 21, 2019, 3:00 PM at St. Martin’s Episcopal Church, 717 Sage Rd. Houston, TX 77056. The family will receive guests at a reception immediately following. In lieu of flowers, please consider a charitable donation to St. Martins Episcopal Church or Amazing Place at www.amazingplacehouston.org. Visit www.DettlingFuneral.com to leave words of condolence for the family.

Douglas W. Potts, 86, of Houston passed away peacefully at home Sunday, October 13, 2019 to join his wife Nedaye, who passed away one year ago in September 2018. Douglas was born November 27, 1932 in Evergreen, Alabama to Lottie and Andrew Potts.... View Obituary & Service Information

The family of Douglas Warren Potts created this Life Tributes page to make it easy to share your memories.

Douglas W. Potts, 86, of Houston passed away peacefully at home...