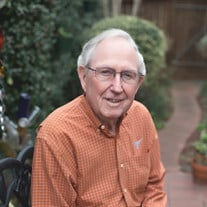 Edward Herbert Causey Jr. passed away Thursday, Nov. 22, 2018 with his family by his side. Ed was born in Lissie, TX on Sept. 8, 1926, to Opal Hough and Edward Herbert Causey, both pioneering families in the rice farming part of Texas. The middle child of five, his early schooling took place in a three-room schoolhouse with his aunt Anna Mae Clipson as teacher. He graduated from Eagle Lake High School in 1944 and volunteered for the Navy at 17, where he served on the aircraft carrier USS Bunker Hill. Ed met Hope Dornon when the two attended Eagle Lake High School and became high school sweethearts. After his Navy discharge in 1946, he joined Hope at the University of Texas at Austin. Ed’s interest was petroleum engineering rather than his family’s tradition in rice farming. On Nov. 29, 1946, Hope and Ed were married in Eagle Lake; the couple strategically planned the ceremony for the day after Thanksgiving so the wedding party could attend the UT-A&M game (which UT won). Hope and Ed were just one week short of celebrating 72 years of marriage when Ed passed away. Ed graduated from UT with a Bachelor of Science in 1950. With his Petroleum Engineering degree in hand, he had to compete with all the returning veterans and earlier graduates in a congested job market. He was very proud to have worked for one company his entire career, Tenneco Oil Company where he started as a laborer for a whopping $1.25 an hour and eventually rose to Vice President. His positions and promotions included Plant Chemist, Plant Engineer, Assistant Plant Superintendent, Manager of Gas Processing, and Director of Gas Processing, culminating with his promotion to Vice President of Tenneco Oil in 1978. He served in many industry organizations, most notably on the Board of Directors and as a Vice President of the Gas Processors Association of America. The couple welcomed children Jan, Jill and Mark and in 1957 the young Causey family moved to Calgary, Alberta. Ed worked on gas exports to the U.S. and the family made many lifelong Canadian friends. In 1960 they returned to Houston and built a home in Memorial Forest, later joining Memorial Drive United Methodist Church in 1961. Ed retired from Tenneco in 1985 and began a busy life of volunteering. He served as Chairman on MDUMC’s Administrative Board, Council of Ministries and Board of Trustees, as well as President and Sunshine Chairman of Bridgebuilders. He was also a valuable asset to the church’s Larkin Street Mission program. Most importantly, his Mr. Fix-It skills were employed at his children’s homes and he devoted endless hours of playtime to his grandkids. Ed is predeceased by his parents; sister, Nadine Halvorsen; and brothers, George Causey and Alan Causey. Left to cherish his memory are wife, Hope; daughters, Jan Brown of Corpus Christi and Jill Williams of Houston; and son, Mark Causey (Janis) of Houston; sister, Jean Banfield (Ivan) of Denison; nephew, Paul Causey (Sue) of St. Jo, TX, and nieces, Charmaine Laughlin (Tom) of Justin, TX and Kris Jones (Allen) of Edom, TX; and cousins, in the Thomas, Clipson, Reel, Hough and Kelly families. His four grandchildren; Amanda Reneau (Ken); Ashley Sims (Rob); Allison Ehrlich (Eric); and Lee Meyer (Laura); along with his seven great-grandchildren will especially miss their extraordinary Pop. Ed lived his life with integrity, honesty, loyalty and hard work. He loved his God, his family and his country. This good man will be greatly missed. A memorial service will begin at noon Friday, Dec. 7 at Memorial Drive United Methodist Church, 12955 Memorial Drive, Houston. Memorial donations may be made to Caring Forever Foundation at MDUMC or a charity of your choice.

Edward Herbert Causey Jr. passed away Thursday, Nov. 22, 2018 with his family by his side. Ed was born in Lissie, TX on Sept. 8, 1926, to Opal Hough and Edward Herbert Causey, both pioneering families in the rice farming part of Texas. The... View Obituary & Service Information

The family of Ed Causey created this Life Tributes page to make it easy to share your memories.

Send flowers to the Causey family.