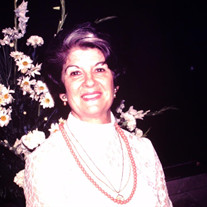 Mrs. Edith Demazeau Deane of Houston, Texas passed away on March 22, 2018 after a full 98 year life. Mrs. Deane was born on December 15, 1919, in Angerville, France just a little over a year after the end of World War I. Mrs. Deane was raised in La Ferte Alais where her early schooling took place. She always said that her fondest memories of childhood were from the years spent in this small community. Her secondary schooling took place in Versailles, France when the family moved due to her father’s promotion to adjutant-chef of the gendarmerie in the city. After graduating, she attended and graduated from the Normal School of St Germain en Laye where she completed her studies in education and obtained her certificate for teaching elementary school. Mrs. Deane also attended the Sorbonne in Paris for additional studies in life sciences. After completing her studies, Mrs. Deane taught at schools in Chateaufort and Sevres in France. She came to the United States in 1946 after World War II marrying Mr. John D. Deane whom she had met in France at the end of the war. The couple resided in Stephenville, Texas, where her children Marie and John were born. In 1956 Mrs. Deane moved with her children to Houston, Texas. She worked for many years in both the medical field and later in the oil and gas industry while in the employ of Dr. Hampton C. Robinson for whom she worked for over 40 years. Mrs. Deane also taught at the Alliance Francais in Houston and she was active in the Houston Symphony Society, The Institute of International Education, The Museum of Fine Arts and the Heritage Society. Mrs. Deane was a devout Catholic and had been active in the parishes of St Anne’s, St Michael’s and St John Vianney. She is preceded in death by her parents, Daniel and Camille Demazeau and her brother Guy Demazeau. She is survived by her daughter, Marie Deane Bell, John and Patricia Deane her son and daughter-in-law as well as four grandchildren, Aaron Deane, Shannon Deane, Daniel Bell, Catherine Groce, her husband Tyler and her great grandson Sheppard Groce. The Funeral Mass will be on Tuesday, April 3rd, 2018 at 10:30 am in the Ars Chapel of St. John Vianney Catholic Church, 625 Nottingham Oaks Trail, Houston, TX 77079.

Mrs. Edith Demazeau Deane of Houston, Texas passed away on March 22, 2018 after a full 98 year life. Mrs. Deane was born on December 15, 1919, in Angerville, France just a little over a year after the end of World War I. Mrs. Deane was raised... View Obituary & Service Information

The family of Edith Demazeau Deane created this Life Tributes page to make it easy to share your memories.

Send flowers to the Deane family.