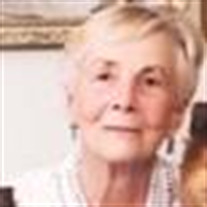 She was born Gloria Elaine Rogers on October 10, 1925 in Ganado, Texas to Owen and Nell Rogers. When she graduated from Ganado High School in 1943, her parents put her on a train to Kingsville, Texas to enroll in Texas College of Arts & Industries (now Texas A&M Kingsville) where she majored in biology and chemistry. In a lab class, she shared a microscope with a young veteran who had just returned from service in Europe in World War II and fell in love. In March 1946, she married James Lynwood Mantooth shortly before she graduated college with honors. They moved to Dickinson, Texas where Elaine taught fifth grade and Lyn coached football before she began medical school at the University of Texas Medical Branch in Galveston. Elaine wanted to be a doctor as long as she could remember. She was one of only nine women in her 1957 graduating class. Despite the fact that some people may have considered her a novelty at the time, she racked up many accomplishments, both personal and professional. Although a local newspaper once referred to her as “a lady doctor,” she never let the label define her. She was a partner in the Magliolo Clinic in Dickinson for many years before opening her own practice in 1973. She became one of the first practicing staff members at the Galveston County Memorial Hospital (now Mainland Center Hospital). Elaine was the first woman to serve as president of both the Galveston County Medical Society as well as the Galveston Chapter of the Texas Academy of General Practice. She was the first woman to be chosen as Chief of Staff at the Galveston County Memorial Hospital. In 1979, she became a specialist in emergency medicine and served as Director of Emergency Medicine at Mainland Center Hospital in Texas City as well as at San Jacinto Methodist Hospital in Baytown. She retired in December 1989. Her greatest joy in life was being a mother. Her two children were born soon after she began her medical practice and they often spent time after school at her office, doing homework and talking to her about their school day. She and Lyn would regularly take the kids along while they played a few rounds of golf; they all enjoyed many adventures on their trips to summer camp. “Dr. Mantooth” became “Dr. Fleming” when she married Dr. George Fleming in 1984 after Lyn’s death. George was a hospital administrator at Houston Methodist and the ‘Doctors Fleming’ had many common friends and interests that they enjoyed in 19 years of marriage until his death in 2003. In 2004, UTMB recognized the establishment of The Elaine Mantooth Fleming, M.D. Endowed Professorship in Emergency Medicine. She was a true pioneer who helped light a path for others. She never expected to get ahead because of what she was. Instead, she chose to distinguish herself by who she was: a dedicated, compassionate professional. Although she routinely dealt with tragedy, death and illnesses, she was forever an optimist, always finding something good in everything. Elaine’s kindness touched many people during her remarkable life. She never stopped caring for those around her; she was loving and gracious until the very end. Preceding her in death are her parents, her brother Owen Rogers, Jr., her sister in law Ann Rogers; and her husband Lyn Mantooth and her husband George Fleming. She is survived by her daughter Debbie Stricklin and her husband Don; her son James Lynwood Mantooth, Jr., and his wife Taryn; her stepson George Fleming and his wife Janis; and her stepson Scott Fleming and his wife Kate; and her grandchildren Kati, Matt, Erin and Tyler Fleming. Our special thanks to Houston Methodist as well as to all of her caregivers that she loved so much at Atria Westchase and Colonial Oaks Westchase. Visitation is Monday, June 17 from 6-8 pm at Dettling Funeral Home, 14094 Memorial Drive, Houston, Texas 77079. Mass of Christian Burial will be celebrated on Tuesday, June 18 at 10 am at St. Cyril of Alexandria, 10503 Westheimer Rd., Houston, Texas 77042.

She was born Gloria Elaine Rogers on October 10, 1925 in Ganado, Texas to Owen and Nell Rogers. When she graduated from Ganado High School in 1943, her parents put her on a train to Kingsville, Texas to enroll in Texas College of Arts & Industries... View Obituary & Service Information

The family of Elaine Mantooth Fleming created this Life Tributes page to make it easy to share your memories.

Send flowers to the Fleming family.