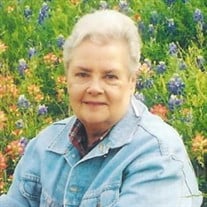 Eleanor M. Ebanks passed from this life on Monday, November 22, 2021 in Houston, Texas at the age of 84. Her Funeral Mass will be celebrated on Monday, December 6th at 10:30 am at St. John Vianney Catholic Church in Houston. Eleanor was born to Paul H. Mengden and Hope (Bandera) Mengden on December 31st, 1936 in Houston, Texas. She attended Saint Agnes Academy and Rice University where she would meet her husband, William J. (Jim) Ebanks, Jr. She married Jim on June 1st, 1958 and lived a life fully devoted to him for more than 63 years. She was preceded in death by her husband, her eldest son, James D. Ebanks, her brothers, Paul H. Mengden Jr. and Joseph “Dave” Mengden, and her parents. Shortly after marrying, Eleanor and Jim started their family. Along with their four children, Eleanor accompanied Jim across the country as he navigated through various career stops. During those years, she taught elementary school and spent countless hours shuffling her kids between their various activities - serving as their supporter and cheerleader. When Eleanor was stricken with metastatic breast cancer in mid-life, Jim faithfully supported her through her treatments, and she would go on to become a 40-year survivor. Later in life, as empty nesters, they thoroughly enjoyed expatriate assignments in both Jakarta, Indonesia and Caracas, Venezuela. Jim and Eleanor eventually retired in College Station, Texas. Eleanor’s personal interests included voracious reading and both playing cards and board games of all kinds. She enjoyed mahjong with friend groups around the world, online word games with relatives, and was especially thrilled that her grandchildren proved to be willing and worthy opponents in any game they might play during their visits together. Eleanor was a talented artist with an amazing attention to detail. She was adept at painting and cross stitching and became an especially gifted quilter. She travelled with friends to many quilting shows and exhibits around the country and frequently won awards for her work. She created beautiful handmade quilts for each of her grandchildren which will remain as treasured memories of her talent. She was a devoted Catholic her entire life and loved our Lord. She served in many ministries including as Eucharistic minister for the homebound of St. Thomas Aquinas Catholic Church in College Station. Hand-in-hand with the deep faith she passed onto her children, the focus of Eleanor’s life remained on her family. From the start, she embraced her husband Jim’s Caymanian heritage and happily joined their large, loving family clan. She adored her children, grandchildren and great grandchildren and wanted to be part of, or hear about, every interest, activity, or achievement they experienced along the way. Undoubtedly, Eleanor will be remembered most for her unfailing devotion to her husband, Jim. When he fell ill, she dedicated the remaining years of her life to his care. We are all blessed and inspired by her unconditional, selfless love and devotion, and we rejoice that they are now reunited in heaven. Eleanor is survived by three children and their spouses, Kathleen M. Pearse (Wayne), Theresa L. Wagner (Jim), William S. Ebanks (Annette), daughter-in-law, Nancy Olson Ebanks, twelve grandchildren, Diana, Erik (Ashley), Laura and Brittany Ebanks, Lisa (Tyson) Russell and Shelly (Eric) Degenhardt, Benjamin, Timothy and Luke Wagner and William, Matthew and Sarah Ebanks, and two great grandchildren, James and Addison Ebanks. A funeral Mass will be held at St. John Vianney Catholic Church at 10:30am on Monday, December 6th. Following Mass, a private rite of committal will occur at Forest Park Cemetery. Funeral arrangements are under the direction of Dettling Funeral Home. The family would like to thank the caregivers at Parkway Place, Amedisys Hospice, and Life Enhancers, particularly Antoinette Huggan, for their loving, compassionate care. In lieu of flowers, the family requests that memorial donations be made to a charity of your choice.

Eleanor M. Ebanks passed from this life on Monday, November 22, 2021 in Houston, Texas at the age of 84. Her Funeral Mass will be celebrated on Monday, December 6th at 10:30 am at St. John Vianney Catholic Church in Houston. Eleanor was born... View Obituary & Service Information

The family of Eleanor Mary Ebanks created this Life Tributes page to make it easy to share your memories.

Eleanor M. Ebanks passed from this life on Monday, November 22,...

Send flowers to the Ebanks family.