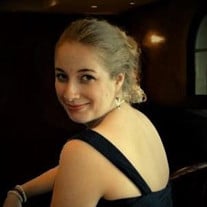 Elizabeth Nolia Trahan Korf passed on to her eternal reward on the 10th of January 2017. She had been fighting Hodgkin’s Lymphoma for 6 months. Though the cancer appeared beaten, her lungs were severely damaged at the end of her treatments by a rare but serious side-effect of the chemotherapy. She died peacefully surrounded by friends and family, with the full rites of Holy Mother Church, and cradled in her husband’s arms. Elizabeth was born on January 21st, 1983 to Carlin and Elsie Faye Trahan of Erath, Louisiana, as the youngest of four children. She spent her whole childhood in Erath, and she met her future husband Joshua Korf during her senior year of high school. She went to college, majored in Speech Therapy, and earned top honors in both her undergraduate and graduate studies. After college, Elizabeth and Joshua were married on December 28th, 2009 and settled in Houston, Texas. There she poured out her love and affection on all she knew, while exercising a particular devotion for those with special needs. She worked at St. Mary’s Seminary as the Accent Reduction Specialist for the ESL students, helping them communicate more effectively as priests. She also worked at Our Lady of Walsingham Catholic Church as the Youth Director with her husband, teaching religious education, leading the youth group, and helping with the Holy House education program. Elizabeth’s loving nature and vibrant personality won over everyone she met. Indeed, it seemed that there were only two categories of people for her: family and friends. Even when faced with language barriers or disabilities, she found ways to make friends, as she continued to do right to the end when heavily sedated in the hospital. Most of all, she was a friend to children, making them laugh and giggle even in the midst tantrums and tears. Elizabeth is survived by her husband Joshua Korf; her parents Carlin and Elsie Faye Trahan; her siblings John, Anna, and Donald; together with scores of close relatives and myriads of friends. Elizabeth’s wake will be on Friday January 20th at Dettling Funeral Home, 14094 Memorial Dr., Houston, Texas 77079 from 3 PM to 6 PM with the Rosary at 4 PM. Her Funeral Mass will be on Saturday, January 21st at The Cathedral of Our Lady of Walsingham, 7809 Shady Villa Lane, Houston, TX 77055 at 10 AM, with a reception to follow in the Great Hall. She will be interred in the columbarium of the Shrine on The Cathedral grounds. A memorial service will be held in Erath, Louisiana at a later date. In lieu of flowers, gifts can be made to the Holy House program at Our Lady of Walsingham, to benefit the children she loved so much.

Elizabeth Nolia Trahan Korf passed on to her eternal reward on the 10th of January 2017. She had been fighting Hodgkin&#8217;s Lymphoma for 6 months. Though the cancer appeared beaten, her lungs were severely damaged at the end of her treatments... View Obituary & Service Information

The family of Elizabeth Nolia Korf created this Life Tributes page to make it easy to share your memories.

Elizabeth Nolia Trahan Korf passed on to her eternal reward on...

Send flowers to the Korf family.