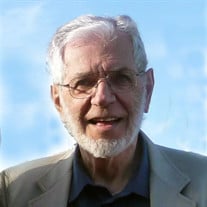 Erik Iver Sandvik was born in Rochester, NY, on October 3rd, 1935 to parents Otto and Gertrude Sandvik. He passed away peacefully at home surrounded by his family on Sunday, October 14, 2018 at the age of 83. Erik is survived by his loving wife of 64 years, Beverly Johncox Sandvik; their children, Terri Sandvik, Erik Sandvik Jr. and his wife Joyce, Kristen Stebbins and her husband Greg, and Craig Sandvik and his wife Cecilia. Also surviving are his grandchildren Scott Sandvik, Jon Sandvik, Susan Lara, Grayson Stebbins and Clarissa Sandvik; his great-grandchildren, Brodie, Annika, Erika and Blake. He leaves behind his beloved pets, Barney and Zoe. He was preceded in death by his parents and sister, Karen Costigan. Following graduation from Brighton High School, Erik attended St. Lawrence University in Canton, New York where he pledged the Sigma Chi fraternity and was active in the Army ROTC and cross-country skiing. He graduated with a Bachelor of Science degree in 1957. After graduation he was awarded a National Science Fellowship to study at Rensselaer Polytechnic Institute where he received a PhD in Physical Chemistry. Erik served in the Army and was stationed at Sandia Base, New Mexico, where he was assigned to weapons effects testing in the Pacific. Erik began his career at Jersey Production Research in Tulsa, Oklahoma in 1961. He moved to Houston in 1965 with the company as it eventually became Exxon Production Research. During his career at Exxon, Erik’s expertise in physical chemistry, computer modeling and petroleum geochemistry resulted in patents and international recognition. After his retirement, Erik lived a full life with many hobbies and interests. He designed and built his home on his timber farm outside Crockett, Texas where he was an avid bow, rifle and black powder hunter during the fall months. He and Beverly designed their summer home outside Creede, Colorado, where he spent summers hiking and fishing. He was particularly proud of climbing a 14er after his second knee replacement in his 70s. He spent winters at his home in Houston. Erik and Beverly were active bird and nature lovers. Following these interests, they traveled throughout Central and South America, England, Scotland and the United States. A memorial service in celebration of Erik’s life will be held Saturday, October 27 at 1:00 p.m., at Dettling Funeral Home 14094 Memorial Drive, Houston, Texas 77079. In lieu of flowers the family requests memorial donations be made to the Nature Conservancy or the Houston Audubon Society.

Erik Iver Sandvik was born in Rochester, NY, on October 3rd, 1935 to parents Otto and Gertrude Sandvik. He passed away peacefully at home surrounded by his family on Sunday, October 14, 2018 at the age of 83. Erik is survived by his loving... View Obituary & Service Information

The family of Erik Iver Sandvik created this Life Tributes page to make it easy to share your memories.

Send flowers to the Sandvik family.