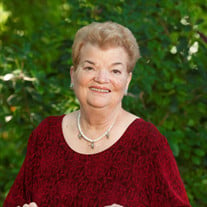 Ernestine “Kiki” Inez Christ Ulrich, beloved mother and grandmother, passed away on July 11, 2020 surrounded by her family. Strong and determined, she courageously fought terminal bile-duct cancer for the last eight months, supported by her family, the thoughts and prayers of family and friends and under the compassionate care of M. D. Anderson Cancer Center. Kiki was born on June 24, 1931 in New Orleans, Louisiana to Inez Ernestine Burguières Christ and Dunbar Leopold Christ. She was the granddaughter of Ida Laperle Broussard Burguières and Jules Martial Burguières Sr. and Alice Dunbar Christ and Emile Christ. When she was very young, her family moved to Pass Christian, Mississippi, where she honed a passion for sailing and participated in many races and regattas well into her thirties. She began high school at the Academy of the Sacred Heart in Grand Coteau, Louisiana and transferred before her junior year to St. Joseph’s Academy in Bay St. Louis, Mississippi. During her time in Grand Coteau, she cherished (and later, often fondly recollected) her occasional weekend visits with her “Uncle” (a cousin) Ed Burguières and his family at the Cypremort house in Louisa, Louisiana. Kiki studied ceramics and art at Newcomb College in New Orleans, Louisiana for two years. She left Newcomb, and for the next year and a half she attended Soulé Business College, where she learned shorthand and typing. In 1953, she began working in New Orleans in the insurance industry. Considered the working girl among her sisters and family, she continued working in this industry until 1969. A natural comedian with a warm personality, she charmed fellow flight passenger and Chicago banking executive, Victor William Ulrich, originally of Mayville, Wisconsin, while she was traveling from New Orleans to Chicago in 1967. Kiki and Victor had several dates while she visited Chicago, and then they began a long-distance courtship, during which they corresponded by phone and letters, and his visits to New Orleans and her visits to see her friend, Zoë Brown, in Chicago. After they married in New Orleans in 1969, she moved to Chicago, and she and Victor began their family and life together there. In 1978, Kiki and Victor moved their family to Houston, Texas, where they remained the rest of their lives. Kiki loved people. She was a self-proclaimed “people person,” often initiating conversations, catching people off-guard and making them laugh. She was bold, spoke her mind freely, instinctively moved towards people, and truly cared about others, often praying for them, calling to check on how they were doing, or visiting them. She had a huge heart. A devout Catholic, she was a long-time member of St. Cecilia Catholic Church, where she served as a Eucharistic Minister, sang for a time in the choir and enjoyed bible studies. She joined a group of the parish’s ladies in volunteering regularly for years at the St. Theresa Little Flower Thrift Stop on Washington Avenue. Kiki later used her people and persuasive skills while working at Annie’s Art & Antiques, a store owned by her dear friend Mary Ann Waters. She had a competitive spirit, and valued keeping her mind active by reading novels and playing bridge. She began playing bridge with her family when she was young, and picked up the game again when she was in her fifties. Her love for connecting with others and making them feel special extended to this area of her life as well, and she often initiated organizing special birthday celebrations and milestone parties for members of her various bridge groups. A member of ACBL Unit 174, she played bridge for the last 40 years of her life with friends, at Westside Bridge Academy, in tournaments, and at Tracy Gee Community Center and the Trini Mendenhall Community Center. Kiki traveled the world and was drawn to new places each time, often traveling with church groups. Her travels brought her to Italy, The Holy Land, Alaska, Hawaii, Canada, Mexico, England, France, Poland, Hungary, Sweden, Denmark, Russia and many more locales. She was a long-time member of Memorial Women’s Club and The Junior League of Houston, with which she continued to volunteer, singing with a group to seniors in assisted-living facilities until her failing health last fall prevented her from continuing. She was a previous member of Southern Yacht Club in New Orleans, Pass Christian Yacht Club, The Junior League of New Orleans, The Junior League of Chicago, and Lifeline, the Houston-based social activities group for widows and widowers. Kiki was preceded in death by her loving husband, Victor William Ulrich; by her parents; by her sisters and their spouses—Helen Dunbar Christ St. Paul and husband, Henry Honore St. Paul Jr.; Marion Moore Christ Clerc, and her husband, Joseph Fred Clerc; and by her sisters-in-law and their spouses—Myrtle Ulrich Held and husband, Austin Held; and Lorraine Doris Ulrich Washechek and husband, Robert Harry Washechek. She is survived by her children and grandchildren: daughter Charlotte Burguières Ulrich Schillaci and her husband, Michael; son William “Bill” Dunbar Ulrich and his wife, Stephanie, and their children—Hunter, Ian and Bryn Ulrich; her beloved dog, Molly; many nieces, nephews, great-nieces, great-nephews, great-great-nieces, cousins, relatives and dear friends. A Mass of Christian burial will be celebrated on Friday, July seventeenth at 11 o’clock in the morning at St. Cecilia Catholic Church, 11720 Joan of Arc Drive, Houston, Texas 77024. To ensure the safety of all guests, and in adherence to COVID-19 protocols, this church will have the entrance doors propped open, many hand sanitizing stations available, and be requesting guests to wear masks and practice social distancing. An interment service will be held at St. Helen Cemetery on the Florence Plantation in Louisa, Louisiana. If you are Catholic, and would like to lift up Kiki Ulrich in prayer, the family would be grateful if you would say a private rosary for her. Remembrances may be made in the form desired by friends. Should friends desire, memorial contributions may be sent to the Society of St. Vincent de Paul in Houston.

The family of Ernestine "Kiki" Inez Christ Ulrich created this Life Tributes page to make it easy to share your memories.

Send flowers to the Ulrich family.