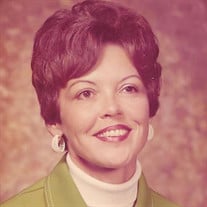 It is with heavy hearts and great sadness that we announce the loss of our loved one, Ethel Lee Earhart. She passed away on Saturday, May 21, 2016 at the age of 81. Ethel Earhart was born on October 30, 1934 in Turkey Creek Louisiana. She was the middle daughter of 3 sisters. She attended Ville Platte High School. During high school she played guard for the basketball team and began working at an early age. Some of her jobs included working as a live-in babysitter, ticket collector at the movie theater, and assisted at a beauty shop. While she was working at the beauty shop her classmates informed her that she was elected as the homecoming queen. Ethel wanted to attend college and her high school counselor helped her with an opportunity to attend SLI (ULL) in Lafayette, Louisiana. She studied Business Administration and took 21 hours per semester while working. Some of her jobs included working in a floral shop and an insurance company. She graduated with a B+ in her major while taking a heavy course load and working. After she graduated she accepted a position with Humble Exxon where she met her husband, Hal. They married in 1956 and she began her life as a stay at home mom. Hal’s career took the family to several cities over the years and Ethel was very busy raising her three children. She enjoyed spending time sewing, playing the ukulele, playing tennis and traveling to her son’s tennis tournaments, fishing with our family in Corpus Christi, and gardening. She and Hal were also interested in the health benefits of vitamins and invented a vitamin wheel dial that was both educational and a quick reference tool. Ethel has always been a devoted mother and when she became a grandmother she continued to be there for them. She currently has 7 grandchildren and 7 great grandchildren, and 2 more on the way. Two of her granddaughters carried on the tradition and graduated from ULL. Two other granddaughters are attending college, one studying music at the University of Wisconsin and the other studying at University of South Carolina. Her grandsons have graduated from college and enjoy electronics and law enforcement. We are blessed to have had Ethel as a role model, devoted mother and grandmother. Ethel was a loving and devoted wife, mother, sister, grandmother, and great grandmother. Ethel will be dearly missed by her two daughters, Karen Starr and husband John of Houston, TX, Patti Guillory and husband, Darrell of Lafayette, La., one son David Earhart and wife Elizabeth of Atlanta, GA, grandchildren, Jason Little and wife Melinda, Jonathan Little, Justin Little and wife Kerri, Jennifer Guillory, Jamie Foreman and husband Jonathan, Emili Earhart and Paige Earhart; seven great-grandchildren, and one sister Marlene Milam of Lafayette, LA,. She is preceded in death by her beloved husband, Harold, and one sister Betty West. A private memorial service was held for the family.

It is with heavy hearts and great sadness that we announce the loss of our loved one, Ethel Lee Earhart. She passed away on Saturday, May 21, 2016 at the age of 81. Ethel Earhart was born on October 30, 1934 in Turkey Creek Louisiana. She... View Obituary & Service Information

The family of Ethel Earhart created this Life Tributes page to make it easy to share your memories.

It is with heavy hearts and great sadness that we announce the...

Send flowers to the Earhart family.