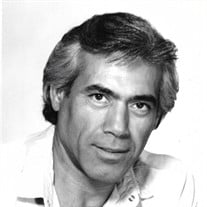 Evaristo Carreon, Jr., 77, of Houston passed away Friday, June 19, 2020 at his home after a lengthy illness. Mr. Carreon was born June 14, 1943 in Elsa, Texas to Evaristo Carreon and Senovia Anzalda Carreon. Evaristo is survived by his wife, Carolyn Cannata; children, Amber Grigsby & husband Scott, Elan Carreon; grandchildren, Taylor Carreon Holman, Ava Grigsby, Ella Rose Grigsby; sister, Rose Sargent & husband Jim; brother, Robert Carreon & wife Viola as well as numerous nieces and nephews. Evaristo grew up in the Rio Grande Valley and in the west Texas area. He set Class 1-A records in the Pole Vault during his high school years. He attended Ranger Junior College before entering the US Army. Mr. Carreon served his country in the Vietnam War as a Combat Medic in the 101st Airborne from 1964 to 1966. After completing his service, Evaristo entered Pan America University where he earned degrees in Nursing and Respiratory Therapy. He worked in the medical field the remainder of his career. At age 38, Evaristo began bodybuilding as a hobby after purchasing a Sears & Roebuck weight set. Over the years he won many amateur competitions such as Mr. Louisiana, Mr. California, Mr. America, and Mr. USA. After winning Mr. California, he auditioned for and won the roll as one of the Conans in the Live show, Conan the Barbarian at Universal Studios. During a promotion for Universal Studios at the Video Production Convention in Las Vegas, he met his wife Carolyn and were married for 24 years. Evaristo was a member of the San Jacinto Corvette Club, the oldest club in Texas, where he and Carolyn enjoyed many weekends participating in drive, car shows, and fun gatherings at member’s homes. Evaristo was loved by those who knew him and will be greatly missed. The family would like to give special thanks to those who cared for Evaristo; the wonderful staff at the VA Home Health Care Services, Dilver Alarcon and Daniel Perez, his nurses; Lori Ohuonu, his health care provider and the staff at Amedisys Hospice, Marcia Watson, his nurse and Ogechukwu Ibem, his spiritual advisor. The Carreon family will be present to receive friends Tuesday, June 23, 2020 from 6:00 PM until 8:00 PM at Dettling Funeral Home, 14094 Memorial Dr., Houston, TX 77079. A Funeral Service will be held Wednesday, June 24, 2020 at 10:00 AM at Dettling Funeral Home. Graveside services will be held at 12:45 PM, following the funeral service, at VA Houston National Cemetery, 10410 Veterans Memorial Dr., Houston, TX 77038.

Evaristo Carreon, Jr., 77, of Houston passed away Friday, June 19, 2020 at his home after a lengthy illness. Mr. Carreon was born June 14, 1943 in Elsa, Texas to Evaristo Carreon and Senovia Anzalda Carreon. Evaristo is survived by his wife,... View Obituary & Service Information

The family of Evaristo Carreon Jr. created this Life Tributes page to make it easy to share your memories.

Send flowers to the Carreon family.