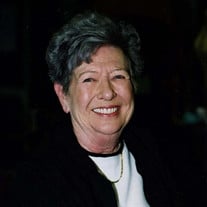 Frances (Fran) Elenora Bergen Ryan, age 84, passed away on November 13, 2015 from gastric cancer and other complications which she suffered the past 10 months. Throughout this time, she remained alert and engaging; utilizing her wonderful sense of humor, memory and kind disposition. She is survived by her loving husband of 62 years, Thomas J. Ryan; her children, Thomas C. Ryan and wife, Kilah and son Killian and great grandchildren Raven, Devin and Chloe; her daughter Jacqueline R. Barbeau and her children, son Sean, daughters Shannon and Sydney; her daughter Deirdre Ryan Wilson, and husband, Christopher A. Wilson their daughter Kelly and sons Blake and Luke. Her grandchildren, Rice Ryan, son of Thomas and Kilah; Nicole Bergen Wilson, daughter of Christopher and Deirdre; and her son-in-law, Terry L. Barbeau, husband of Jacqueline Ryan Barbeau predeceased her. Frances was born in Brooklyn, New York on April 24, 1931, the daughter of Francis Jacques Van Brunt Bergen and Alma Gunnarson. She is survived by her brothers, John Andrew Bergen and William Francis Walsh, M.D., and his wife, Karen Gannon. Frances graduated from Fort Hamilton High School in, Brooklyn, N.Y. and worked at John Wanamaker in Greenwich Village and American Can Company in NYC. She married Thomas J. Ryan, her schoolmate and best friend for many years on June 20, 1953 at St. Ephrem's Roman Catholic Church in Brooklyn, New York. She and Tom resided in Brooklyn and Huntington, New York until the early 1970's when they were transferred by Tom's employer to several assignments in England and one in Canada. Between these several assignments they became residents of Texas and happily enjoyed living in Houston. Frances was an avid bridge player and a Silver Life Master in the American Contract Bridge League. She was also active in the collection of antique chinaware and linens. She is a member of the Lady Washington Chapter, National Society Daughters of the American Revolution and the Col. John Alston Chapter, National Society Colonial Dames XVII Century. She was a devoted, caring and loving wife, mother, grandmother and great grandmother. One of her greatest pleasures was having her entire family with her and her husband on weekends and holidays for meals and family card games. She initiated the family's annual get-together at Schlitterbahn Water Park in New Braunfels each summer leasing a house within the water park to accommodate the entire family and her brother's as well. This was a major occasion for the grandchildren and to this date they still love to talk about the fun and good meals with their cousins and family. Cruises from Galveston replaced the water park when the grandchildren got older and were also a big event for all of the family to be together, her last being June, 2015 having a wonderful time. Visitation for Frances will be held at Dettling Funeral Home, 14094 Memorial Drive, Houston, TX 77079 on Thursday, November 19, 2015 from 6 pm to 8 pm including a vigil and rosary in the last hour. A celebration of Life Mass will be held on Friday, November 20, 2015 at 10:30 am at St. John Vianney Catholic Church, 625 Nottingham Oaks Trail, Houston, TX 77079. Graveside Services will be held at VA Houston National Cemetery following Holy Mass via motorized cortege. In lieu of flowers, the family requests that contributions be made in her memory to St. John Vianney Catholic Church, or the charity of their choice.

Frances (Fran) Elenora Bergen Ryan, age 84, passed away on November 13, 2015 from gastric cancer and other complications which she suffered the past 10 months. Throughout this time, she remained alert and engaging; utilizing her wonderful sense... View Obituary & Service Information

The family of Frances Bergen Ryan created this Life Tributes page to make it easy to share your memories.

Send flowers to the Ryan family.