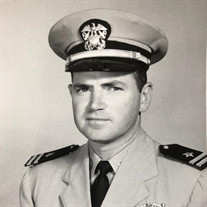 Francis Clinton Johnson, Commander, U.S. Navy, Retired, known variously to family and friends as “Pat,” “Papa,” or just “The Commander,” passed away peacefully at home on June 7, 2020, surrounded by his family. He was ninety-five years old, and he was extraordinary. Like so many of the Greatest Generation, Pat grew up during the Great Depression, and found himself an orphan at fifteen, losing both parents to illness in the span of one year. At 17, he enlisted in the Navy, eager to take the fight to the Nazis. His commanding officer encouraged him to apply to the Naval Academy. He defied the odds (some 5000 applicants), and secured a spot in the Naval Academy Preparatory School, before admission to the Naval Academy in 1944. His years at the Academy were the start of a lifelong love affair with order, schedules, and perfect, absolute cleanliness. He flourished there, graduating with honors and being offered prestigious spots over and under the water, as a naval aviator or submariner. He chose submarines, with a brief stop in northern California for a Masters in Engineering at Berkley. Pat’s career with the Navy would lead the young Texan to far off and exotic places, such as the gardens at Buckingham Palace, where he met a young Princess Elizabeth, under the ice of the North Pole, and a Naval dock down in the Florida Keys, where he would occasionally chat with President Truman, during Truman’s morning walks at the naval base. Ultimately, he achieved the rank of Commander, and served as the Executive Officer of the USS Triton (SSRN-586), the largest and most powerful nuclear submarine built at that time, powered by two nuclear reactors. Following his service on the Triton, Admiral Hyman G. Rickover, the “Father of the Nuclear Navy”, ordered him to prospective command school in preparation to assume command of the USS Seawolf (SSN-575). Unfortunately, family illness forced him to return to Houston, where he joined the faculty of Rice University, teaching naval science and nuclear engineering in the NROTC program. While at Rice, the U.S. Atomic Energy Commission licensed him to operate the nuclear reactor on campus. The Commander retired from the Navy in 1966, and embarked on a second career in commercial real estate development, joining his big brother, Joseph J. Johnson, founder of MetroNational. Having learned the trade at his brother’s side, and holding Joe in the highest regard, Pat would eventually leave to start his own commercial development business. He was successful, building various real estate projects all over the city, but the real measure of his success was the extended network of employees, friends, and family he would help, support, and advise over the years. Everyone who worked for him became family. He was an exceptionally generous father figure for countless individuals. Pat is preceded in death by his beloved wife, Sally, daughter, Elizabeth Miller, and son, David Johnson. He is survived by his children and their spouses, Brian and Lynne Johnson, Sally and Peter Gale. He is also survived by nine grandchildren—Anthony, Benjamin, Beth, Christopher, Hannah, Kaitlyn, Michael, Patrick, and Ryan—their spouses, and a growing herd of great-grandchildren—Cody, Emma, Fitz, Henry, Jackson, Lucas, Quinn, Thomas, and Will. The family will gather for a private funeral service this week. Pat will be laid to rest at Memorial Oaks Cemetery in Houston with a Navy Color Guard. In lieu of flowers, please consider making a contribution to the USNA Alumni Association, Texas Gulf Coast Foundation www.txgulfcoast.usnachapters.net Visit https://youtu.be/RhnML6rfUJ4 For Live Streaming of Pat's Funeral Service at 10:00 AM and Graveside at 11:00 AM.

Visit https://youtu.be/RhnML6rfUJ4 For Live Streaming of Pat's Funeral Service at 10:00 AM and Graveside at 11:00 AM.

Send flowers to the Johnson family.