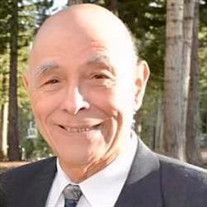 Frank Carmelo Carvelli, 85, passed away on September 24, 2021 in Houston, TX surrounded by family. Frank was born on February 7, 1936 in Petilia Policastro, Italy to Joseph and Maria Angela Carvelli. He is preceded in death by his parents and his younger brother Tony. He is survived by his son Frank Carvelli and wife Paula of Houston, TX, son Joseph Carvelli and wife Betsy of Dhahran, Saudi Arabia, daughter Christina Carvelli and husband Wameeth Fadhli of Orlando, FL, daughter Catherine Okuliar and husband Alex of Bethesda, MD, and 12 grandchildren who adore him. He is also survived by his sister Maria Perry of Houston, TX and his nephews Frank Ceraudo, Mark Carvelli and nieces Lori Carvelli, Kim Carvelli and Sandy Carvelli. Frank was born and raised in a small town in southern Italy. At the age of 19, Frank, his parents and siblings immigrated to the United States and settled in Warren, Pennsylvania. He proudly served in the U.S. Army as a medical technician for 2 years before working for a furniture maker and Sylvania. Always in search of a better way to do things and a better life for his family, Frank moved to Houston, TX and founded Better Home Products on June 6, 1967. He led the company for over 50 years, and at its peak, employed over 200 employees in four states. Frank was the proud patriarch of the family who always put his family first. He inspired his children and all who knew him with his determination, intelligence, and generosity. Frank was a devout Catholic and an active member of St. John Vianney parish for over 50 years. Some of Frank’s best times were spent cooking multiple course meals for his family and friends, playing cards, gardening, attending the theater, going to the deer lease, and vacationing with family in South Padre Island. We were blessed to have Frank in our lives and are heartened that Frank is reunited with his parents. We will deeply miss him. A visitation will be held on Friday October 1, 2021, at 10:00 AM, followed by a vigil service at 11:00 AM at Dettling Funeral Home. A funeral Mass will be held at St. John Vianney Catholic Church at 625 Nottingham Oaks Trail Houston, TX 77079 at 1:30 PM. Immediately following, a private graveside service will be held at Forest Park Westheimer Cemetery.

Frank Carmelo Carvelli, 85, passed away on September 24, 2021 in Houston, TX surrounded by family. Frank was born on February 7, 1936 in Petilia Policastro, Italy to Joseph and Maria Angela Carvelli. He is preceded in death by his parents and... View Obituary & Service Information

The family of Frank Carmelo Carvelli created this Life Tributes page to make it easy to share your memories.

Send flowers to the Carvelli family.