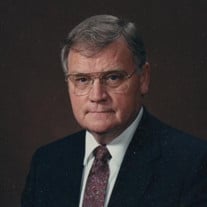 GARRETT R. GRAHAM, age 97, beloved husband, father, grandfather, and friend, passed away on May 1, 2022. A memorial service will be held at Memorial Drive United Methodist Church, 12955 Memorial Drive, Houston, on Monday, May 16 at 11:00am. In lieu of flowers, remembrances may be made to The Caring Forever Fund at MDUMC. Garrett was born January 24, 1925 in Ann Arbor, Michigan to Russell and Rene Garrett Graham. He lived many years in Ann Arbor, receiving his Bachelor of Science degree from the University of Michigan and teaching science at Tappan Junior High before earning a Master’s degree in Hospital Administration from the University of Michigan. On April 10, 1950 Garrett married Dory Jean Heldreth, his companion, soul mate and best friend. Together they raised four children. Dory predeceased him in December 2017 after enjoying over 67 wonderful years of marriage. After a career in hospital administration in Michigan, Indiana and Pennsylvania, Garrett served as President and CEO of the Greater Houston Hospital Council from 1970 until his retirement in 1993. During his time at the Greater Houston Hospital Council, Garrett was instrumental in the development of HAHERN, the early radio communication between EMS and the area hospitals. Garrett was also involved in the formation of Oil Flights, an organization that utilized available oil company aircraft to transport surgeons and donated organs to patients at medical centers across the country. Many other programs benefitting Houston area hospitals were developed by the Council during his tenure, which were as wide-ranging as group purchasing agreements and involvement in national legislation relating to health care, sending groups to Washington, D.C. to meet with House and Senate members and staff. In addition to his involvement in many local health-related organizations, he served in a number of national hospital organizations. Garrett was President of the American Association for Hospital Planning and was Chairman of the Conference of Metropolitan Hospital Associations. He was also a Fellow of the American College of Healthcare Executives. At Memorial Drive United Methodist Church, Garrett was an active member of the Bridgebuilders Sunday School class and for many years was a member of the Chancel Choir. In retirement he and wife Dory became avid genealogists. They traveled across the country visiting courthouses, libraries, and cemeteries, searching for information on their ancestors. They also assisted many of their friends to trace their respective family histories. As ancestry information became available on the Internet, he became adept at doing that research online. Garrett was a longtime polio survivor, living with the disease for over 95 years. He was first diagnosed with the disease at age 1½ at Shriner’s Hospital in Portland, Oregon and underwent numerous surgeries at Shriner’s and at University Hospital in Ann Arbor. Despite the polio, Garrett led an active life, becoming an Eagle Scout and enjoying outdoor recreational and work activities. Those who knew Garrett for even a short time became acquainted with his ability to come up with just the right pun, and often wondered how he could this so quickly. Many who interacted with him lately commented with surprise that at age 97, he was still constantly using his cell phone for texting and surfing the Internet. Garrett is survived by his four children, Garrett H. Graham and wife Karla of Houston, Andrew C. Graham and wife Laurie of Spicewood, Texas, Gail S. Cline and husband Charlie of Katy, and Amy G. Sigler of Meridian, Idaho. He is also survived by grandchildren Garrett Patrick Graham of Houston, Michael C. Graham and wife Traci of Fernandina Beach, Florida, Matthew D. Graham and wife Kathryn of Virginia Beach, Virginia, Nathan D. Stinson of Dallas, Daniel W. Sigler and wife Shelbie of Nampa, Idaho, David R. Sigler and wife Maggie of Newberg, Oregon, and Megan L. Cushing and husband Allan of Portland, Oregon. Also surviving Garrett are great-grandchildren Elise and Robert Graham, Rebekah, Hannah, and Joshua Graham, and Lincoln and Hayden Sigler, as well as sister-in-law Joan Bell and husband Dale of Sutton’s Bay, Michigan, and numerous nieces and nephews. Garrett was devoted to his family and the love and respect he showed to his family and friends was evident. He was likewise loved and respected by many and will be missed dearly.

GARRETT R. GRAHAM, age 97, beloved husband, father, grandfather, and friend, passed away on May 1, 2022. A memorial service will be held at Memorial Drive United Methodist Church, 12955 Memorial Drive, Houston, on Monday, May 16 at 11:00am.... View Obituary & Service Information

Visit https://www.mdumc.org/garrettgraham to join the livestream of the service.

Send flowers to the Graham family.