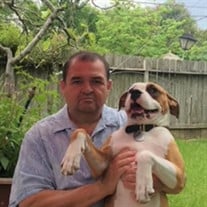 Gary Raymond Caylor 66, of Houston passed away February 18, 2022. Gary was born May 23, 1955, in Paita, Peru to James Franklin Caylor and Aura Magdalena Vargas Machuca. He is preceded in death by his parents and his older brother Michael. He... View Obituary & Service Information

The family of Gary Raymond Caylor created this Life Tributes page to make it easy to share your memories.

Send flowers to the Caylor family.