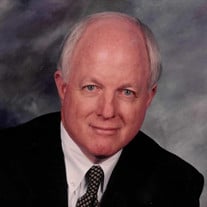 George E. McDonald, Age 80, of Houston, Texas, died January 15, 2020. Born December 10, 1939, in Oklahoma. Survived by his wife of thirty-seven- and one-half years, Maureena Tegeler McDonald and two sons, Brent Carson McDonald of San Diego, California, and Braden Willis McDonald of Albuquerque, New Mexico; sister Janie Kimball Comstock and husband Bill of Oklahoma City; his mother-in-law, Lelia Tegeler; sister-in-law Laverne Moody and husband Dennis all of Sweeny, Texas, and niece Shelby Hudson and husband Glenn of Houston, Texas. He was predeceased by his parents Mr. and Mrs. William H. McDonald. After graduating in 1958, in the first Senior Class at Harding High School in Oklahoma City, Mr. McDonald attended Westminster College in Fulton, Missouri for two years. He graduated in 1963 from The University of Oklahoma with a degree in Industrial Engineering. He was a member of Sigma Alpha Epsilon Fraternity and served as president of The Oklahoma Kappa Chapter in 1962. He served for two years as an Air Defense Artillery Officer in the U.S. Army from 1963-1965, primarily in Germany. He retired 12/31/91 after 27 years of service with Vinson Supply Company where he was Executive Vice President. After retiring from Vinson Supply, Mr. McDonald worked as a consultant for a number of companies in the telecommunications, marketing and distributions industries. The consulting work was done initially with McDonald Perrin & Associates and then through his own company, G. McDonald & Company. Mr. McDonald was a lifelong member and ordained elder in the Presbyterian Church. He was a Life Member of the Society of Petroleum Engineers and a member of the Houston Chapter of the American Petroleum Institute. He had previously served on the board of directors of the Houston Industrial Distributors Association as well as Lochinvar Golf Club, where he was a member for many years. He was also a past active member of BraeBurn Country Club. In his later years he served on the Board of Trustees of the Medical Benevolence Foundation and was very involved in the daily operation of the Project Cure warehouse in Houston. He was also an active board member of the Texas House Foundation. A Memorial service will be held Friday, January 24, 2020 at 1:00 PM in the Chapel of Grace Presbyterian Church, 10221 Ella Lee Ln., Houston, TX 77042; The Reverend Dr. Michael Fry, Officiant. A reception will follow services on the church campus. Mr. McDonald will be laid to rest at VA Houston National Cemetery in a private family ceremony. In lieu of flowers, contributions in George’s memory can be made to Grace Presbyterian Church or Houston Hospice.

The family of George E. McDonald created this Life Tributes page to make it easy to share your memories.

Send flowers to the McDonald family.