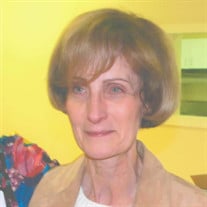 Gloria Jean Stephen, 78, of Houston passed away Tuesday, October 5, 2021. Mrs. Stephen was born on April 14,1943 in Toledo, Ohio to Bernard and Gertrude Hessling. She is preceded in death by her husband, James Robert Stephen. She is survived by her son, James Todd Stephen. She is also survived by her sister-in-law, Joan Little; brother-in-law, Bart Little; and their family. Gloria grew up in the Toledo, Ohio area. At the age of 9 she moved with her parents to Pittsburgh, Pennsylvania, and remained there until graduating from high school in 1961. She attended the University of Dallas during her freshman year of college, then relocated with her parents to Houston. In 1966 Gloria finished her degree in Speech Pathology at the University of Houston and began her 30-plus year career in the field of special education. Gloria earned her master’s degree in Clinical Psychology in the early 1980s at the University of Houston, Clear Lake and became an Educational Diagnostician. She worked mostly with elementary school students, and served at many schools throughout the Aldine Independent School District. Mrs. Stephen was absolutely passionate about her work, and was tirelessly devoted to it and to her family. Mrs. Stephen loved to hike the Grand Tetons with her family, something they did as often as possible until 2004. She had many recipe books, and loved to prepare homemade meals for her family. She also enjoyed volunteering for the St. Vincent de Paul Society at St. Cecilia Catholic Church. A visitation will be held on Tuesday, October 19, 2021, from 6:00 to 7:00 PM at Dettling Funeral Home, 14094 Memorial Dr., Houston, TX 77079. The Funeral Mass will begin at 2:30 PM on Wednesday, October 20, 2021 at St. Catherine of Siena Catholic Church, 10688 Shadow Wood Dr., Houston, TX 77043. Mrs. Stephen will be laid to rest at Memorial Oaks Cemetery after the Holy Mass.

Gloria Jean Stephen, 78, of Houston passed away Tuesday, October 5, 2021. Mrs. Stephen was born on April 14,1943 in Toledo, Ohio to Bernard and Gertrude Hessling. She is preceded in death by her husband, James Robert Stephen. She is survived... View Obituary & Service Information

The family of Gloria Jean Stephen created this Life Tributes page to make it easy to share your memories.

Send flowers to the Stephen family.