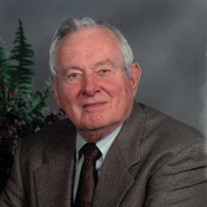 Gregory Raymond Happe died April 26, 2020 at home in Houston, TX. He was born November 1, 1929, second son of Howard C. Happe, Sr. and Rose Walker Happe in Bronx, NY. He was reared in Queens Village, NY where he attended Our Lady of Lourdes grammar school. It was there that he learned to love his Catholic faith and it was there he made many lifelong friendships. He graduated from Sewanhaka High School, Floral Park, NY in 1948. He excelled in baseball and golf. He won the Queens Interscholastic golf championship in 1948. A sportswriter for the Long Island Daily Press described Greg as a "giant killer" and "luminary" on the links. His love of golf was a lifelong passion and he listed playing the old course at St. Andrew's in Scotland as one of his favorite memories. He enlisted in the United States Navy in 1950 and served on the USS Wisconsin until his honorable discharge in 1954. It was on a visit home on leave in 1953 that he met the love of his life, Julia Ann McGuire. They married October 9, 1954 at Resurrection Ascension Catholic church in Rego Park, NY and remained happily married until Julie's death in 2016. Greg graduated from New York University in 1962 with a Bachelor of Business Administration. Greg began his career at ESSO before joining Ebasco Services in 1966. Greg was transferred to Houston, TX in 1970 where the family became members of St. Cecilia's parish. Greg retired in 1994 after a long and successful career with Ebasco. He loved his family and cherished family time above all else. He was an avid sports fan with an encyclopedic knowledge of sports. He loved baseball, football, and ice hockey and shared this love with his grandson, Darious, as they spent time viewing sporting events, critiquing the coaching, and calling the plays before the referee. As a child he caddied to earn pocket money and caddied for Babe Ruth on several occasions. He was a devoted Brooklyn Dodger fan. When the Dodgers relocated to Los Angeles, he switched his allegiance to the New York Mets, and, finally to the Houston Astros. Although not a New York Yankee fan, Greg was proud to have witnessed Don Larsen pitch a perfect game in the 5th game of the 1956 World Series against the Dodgers. He loved the New York Football Giants through thick and thin and proudly sported a "Wait Until Next Year" button on his jacket. He once took his family to Giant training camp in Connecticut to watch Frank Gifford and the rest of the team practice instead of taking the family to the Statue of Liberty as suggested by his wife. He was ecstatic when the Giants won the Super Bowl in 1987. He adored ice hockey and achieved a lifelong goal of attending a professional hockey game in Canada. He was preceded in death by his parents, Howard Happe, Sr., Rose Happe, brothers, Howard Happe, Jr., and Kenneth Happe. He is survived by his daughters, Anne-Marie Happe of Decatur, GA; Ellen Happe Phillips (Terry) of Houston, TX; Deirdre Happe Workman of Windsor,.CO (Tom); Monica Rose Happe of Austin, TX and three grandsons, Che Elkeilani of Istanbul, Turkey; Darious James Mohebi of Atlanta, GA; and Cyrus Happe Mohebi of Austin, TX. Greg will be laid to rest at VA Houston National Cemetery in a private ceremony on May 6, 2020. A memorial mass will be celebrated at St. Cecilia Catholic Church at a later date. The family would especially like to thank Jenifer Cramer Levins, RN, Jackie Johnson, and Nathalie Yeka for the loving and compassionate care provided to both Julie Happe and Greg Happe. In lieu of flowers, donations can be made to Angela House, Houston, TX.

Gregory Raymond Happe died April 26, 2020 at home in Houston, TX. He was born November 1, 1929, second son of Howard C. Happe, Sr. and Rose Walker Happe in Bronx, NY. He was reared in Queens Village, NY where he attended Our Lady of Lourdes... View Obituary & Service Information

The family of Gregory Raymond Happe created this Life Tributes page to make it easy to share your memories.

Send flowers to the Happe family.