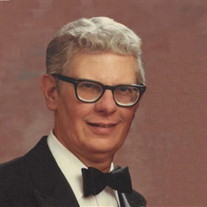 Gustave Antoine Mistrot, III, 88, died on Thursday, November 16, 2017. He was born at St. Joseph’s Hospital in Houston on May 16, 1929, the only child of Gustave Antoine Mistrot, Jr. and Emily Helene Marion Kirlicks Mistrot. He is survived by his wife of 33 years, Bernice Bell Mistrot; his brother-in-law, Fred Bell and wife Lynne; nieces Alison and Stephanie Bell; his only surviving first cousin, Larry Schofield; and numerous more distant cousins in the Mistrot, Patout, Kirlicks, and Thomas families. Gus was salutatorian of the St. Thomas High School Class of 1946 and a petroleum engineering graduate of the Agricultural and Mechanical College of Texas, Class of 1950, where he lettered in fencing. He had a lifelong devotion to both institutions, and was always grateful for the education and discipline provided by the Basilian Fathers and the Aggie Corps of Cadets. His first job upon graduation was with the Railroad Commission of Texas, followed by several energy companies; he retired from Conoco in 1994. A Legion of Honor Member of the Society of Petroleum Engineers, he was named a Distinguished Member of that organization in 1987 for his many years of volunteer work on the national petroleum engineering licensing exam. Always devoted to his Catholic faith, he was a 68 year member of the Knights of Columbus, a charter member of Council 3205 of College Station, Past Grand Knight of both Council 3279 of Sinton and Council 803 of Houston (of which his name-sake grandfather was Grand Knight in 1909), and a member of Msgr. George A. Wilhelm Fourth Degree Assembly 1094. He was a member of St. John Vianney parish for 33 years. After his marriage to Bernice on September 3, 1984, they began researching his family history and became active in Concerned Citizens for Washington Cemetery Care, Inc. and its successor, Washington Cemetery Historic Trust. He served on the boards of CCWCC and WCHT for 31 years, the last 14 years as President of WCHT. Gus was also a proud member of the Sons of the American Revolution, Robert Rankin and Alexander Hodge chapters; General Society of the War of 1812, Zachary Taylor chapter; Sons of the Republic of Texas, San Jacinto chapter; Sons of Confederate Veterans, Albert Sidney Johnston camp, and the Military Order of the Stars and Bars, Texas chapter. He was recently honored by the Texas Society SAR for his work over the last 15 years to mark the graves of 200 veterans of the War Between the States who are buried in Washington, Glenwood, and Magnolia cemeteries in Houston. Gus wishes to thank all of the skilled and compassionate doctors, nurses, therapists, and other medical personnel who have aided him over the last several years with a variety of high tech interventions and implants. Special thanks to his cardiologist, Dr. Anil Odhav, who extended his life by nearly 15 years. As Gus often observed, “With apologies to Gilbert and Sullivan, I Am the Very Model of a Modern Medical Miracle.” The family will receive friends on Monday, November 20 from 6 pm until 8 pm with eulogies at 7 pm and a Vigil Service and Rosary at 7:30 pm at Dettling Funeral Home, 14094 Memorial Dr., Houston, TX 77079. The Funeral Mass will commence on Tuesday, November 21 at 10:30 AM at St. John Vianney Catholic Church, 625 Nottingham Oaks Trail, Houston, TX 77079, with Rev. Troy Gately officiating. Pallbearers will be Butch Day, Charles Dunbar, Steven Dunbar, Bryan Fox, Dennis Giuffré, Thomas Green, Allen Greene, Tom Jackson, and Kameron Searle. Interment will be in Glenwood Cemetery beside his parents, grandparents, and great grandmother. In lieu of flowers, please consider contributions in Gus's memory to the Texas A&M Foundation “Gus A. Mistrot, Jr., Class of 1912, Corps of Cadets Scholarship,” or St. Thomas High School “Capital Campaign,” or Washington Cemetery Historic Trust.

The family of Gustave Antoine Mistrot III created this Life Tributes page to make it easy to share your memories.

Send flowers to the Mistrot family.