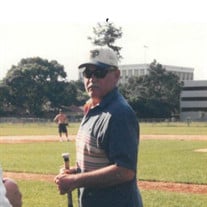 Guy Edward Parker passed on June 20, 2022. Guy was born in Houston, Texas on March 4th, 1948, to Edward and Marilynn Parker. Guy was a very athletic young man and he and his brother Tommy could always be found outdoors either playing sports or fishing. Guy grew up in Houston but spent many summers in Florida and Minnesota. Guy’s athletic career continued to grow throughout his childhood eventually earning All-City Honors in football his ninth-grade year. His success as a football player continued once he started attending Milby High School where he was a two-year letterman playing middle linebacker. He also earned All-City Honors his senior year, lettered twice in track for throwing the shot put and was a member of the band the Rag Nots. Even though Guy had a full calendar he always made time for friends and fun, which allowed him to be voted the most popular student in his class his junior year. After high school, Guy attended the University of Arkansas where he earned a full football scholarship. He quickly became a standout player earning a starting spot his sophomore and junior year as an outside linebacker, earning all Southwest Conference Honors in 1968. Guy would go onto play in the 1969 Sugar Bowl in New Orleans against the University of Georgia. We will not mention the infamous story that occurred prior to the game, but despite that he was able to earn All Sugar Bowl Team of the Decade Honors. Guy was truly a fun-loving man and never missed out on a good time, which caused him to sit out his true senior season at Arkansas, missing a chance to play in the 1969 Great Shoot Out against Texas. In 1970, Guy returned for his fifth year moving back to his true position of middle linebacker again earning All Southwest Conference Honors. In the final game of the year against Texas he suffered a career ending knee injury while making an interception that prevented him from continuing his football career in the NFL. Guy was a true lover of education deciding to stretch his 4-year undergraduate degree into a 6 1/2-year program just to ensure he learned everything he could. After graduating from Arkansas, he moved back to Houston and began his career in Oil and Gas sales. He met his wife of 45 years; Sandy Lee Parker and they were married in November of 1977 at Memorial Drive Presbyterian Church. Guy and Sandy loved to travel and spend time with friends and family before welcoming their son Justin and daughter Jordan. In 1985, Guy and Sandy made their home in the Memorial area where they lived for the next 35 years. Guy spent most of his time on the football, soccer, baseball, basketball, and track fields/courts coaching his two kids. He was at every single one of their games and almost all their practices. His kids were his top priority and he always made time to be with them and help them with anything he could. Guy always had a great personality and smile and made fast friends anywhere he went (apart from the referees at his kids’ games). Guy was always the life of any conversation or gathering, but he was also tough and would not let anyone cross him or the people he cared about. As great of a father as Guy was, he was an even better grandfather. He devoted his time to his grandchildren and was there for them any time that was needed (and sometimes when it was not) instilling his love of sports and life in general. In the Spring of 2020 Guy was diagnosed with ALS, despite this, he never lost his great personality and smile and still did everything he could to support his family and be with them as much as possible. Guy was a fun loving, caring person, who put his family and friends first always. He made a big impact on everyone he ever met, and he will be missed dearly by all. He leaves behind his wife Sandy Lee Parker, his son Justin Parker and wife Melissa, Daughter Jordan Golebiowski and husband Mike, his grandchildren Leah, Austin and Ford Parker; Sadie, Parker and Andie Golebiowski; his brother Tommy Parker & Wife Judy and their son Dalton Parker. Guy is proceeded in death by his father Edward Myron Parker and his mother Marilynn Ohman Parker. A Memorial Service Celebrating Guy’s life will be held Wednesday, July 6, 2022 at Second Baptist Church West Campus, 19449 Katy, Frwy, Houston, TX 77094. The time of the memorial service is pending and will be posted as soon as it is finalized. In lieu of flowers please consider contributions in Guy’s memory to www.ALS.net

Guy Edward Parker passed on June 20, 2022. Guy was born in Houston, Texas on March 4th, 1948, to Edward and Marilynn Parker. Guy was a very athletic young man and he and his brother Tommy could always be found outdoors either playing sports... View Obituary & Service Information

The family of Guy Edward Parker created this Life Tributes page to make it easy to share your memories.

Send flowers to the Parker family.