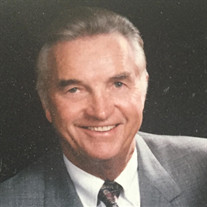 Harry Dean Lane, 90, passed peacefully at his home in Houston, Texas on September 5, 2016. Harry was born on July 13, 1926 in Highland Park, Illinois to Joseph and Geraldine Lane. He attended Highland Park High School, in Highland Park, Illinois. After graduating high school, Harry joined the US Navy, serving his country from 1944-1946. After serving his country, Harry was accepted into Brown University in Providence, Rhode Island, graduating with a Bachelor of Science Degree in Mechanical Engineering and Architecture. He was a member of Phi Delta Theta Fraternity at Brown. Harry moved to Houston, Texas in 1950 accepting an engineering position with the Loomis Company. In 1952, Harry met the love of his life, Beverly Ann Burke, in Houston, Texas. He and Beverly had a wonderful marriage for 64 years and are survived by their seven children. In 1952 Harry and Beverly moved to El Paso, Texas, where he began an extensive career in architecture, engineering, development and interior design with B. Rea Nesmith and formed Nesmith-Lane and Associates. Some of the numerous developments included government buildings, apartment projects, shopping centers, banks and numerous stores. Harry and Beverly stayed incredibly busy with their seven children participating in all of their sports, Indian guides, boy scouts and attending countless parent/teacher meetings! In 1968, Harry accepted a position of Vice President of Planning and Development with Century Management and Development Co., which enabled them to move back home to Houston living closer to her mother and the extended Burke family. Century Development was known for the development of such landmarks as Greenway Plaza, the Houston Summit, and many other buildings that frame the Houston Skyline today. Harry went on to start his own firm, Lane Development Company in 1974, and was proud of and known for his two story atrium office buildings, Grand Hotels in Houston and Bahamas as well as the Summit Towers in Ft. Worth, Texas. Harry was a member of the American Institute of Architects, State of Texas Professional Engineers, National Society of Professional Engineers, The Texas Society of Professional Engineers and the Phi Delta Theta Houston Alumni Club. Harry loved his hobbies and spent countless hours building magnificent small scale wooden ships. He enjoyed playing golf and tennis, and treasured his time spent hunting with his five sons. Harry is preceded in death by his beloved wife, Beverly Burke Lane, his parents, Joseph and Geraldine Lane and his brother, Joseph Lane. His brother- in- laws, Billy Burke, Eddie Burke, Jimmy Burke, Hobby VanZandt and Johnny Werstler. His sisters-in-law, Betty Burke and Mary Evelyn (Puddin) Burke. He is survived by his two sisters, Geraldine Werstler and Mary Ester Reading. His sister-in-laws, Katie McConn, Susie VanZandt, Toni Burke and Robin Burke. His brother-in-laws, Jack Burke, Jr., and Jack McConn. Harry will forever be remembered by his loving children and their spouses, Bobby and Lisa Lane, Burke and Gail Lane, Jaime and Bruce Jamison, Laurie and Jim Snyder, Mark and Terri Lane, Dean and Regina Lane, Michael and Tammy Lane. He was treasured by his thirteen grandchildren, and one great grandchild and countless nieces and nephews along with friends and family that were blessed to have known him. The Lane family would like to express their deep appreciation to Lynn Paddio, Vernice Bennett, Berthenia Williams and Nicole Campbell for their devotion and care of their dad over the last couple of years. Friends are cordially invited to visitation Monday, September 12, 2016 between 6 p.m. to 8 p.m. at Dettling Funeral Home, 14094 Memorial Drive, Houston, Texas 77079. A memorial service celebrating Harry’s life will be held Tuesday, September 13, 2016 at 10:00 a.m. in the Chapel at Grace Presbyterian Church, 10221 Ella Lee Lane, Houston, Texas 77042, with the Reverend Mike Fry officiating. In lieu of flowers, donations may be made to Marbridge, P.O. Box 2250, Manchaca, Texas 78652 or at www.marbridge.org or to the charity of your choice.

The family of Harry Dean Lane created this Life Tributes page to make it easy to share your memories.

Harry Dean Lane, 90, passed peacefully at his home in Houston,...

Send flowers to the Lane family.