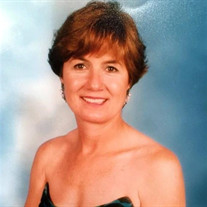 A beautiful person passed away peacefully on Saturday, December 29, 2018. She was warm, shy, and lovely in acceptable ways. Helen Patricia Dixon Allen, was born in Luton, Bedfordshire, England on October 28, 1941 to Margaret and Frank Dixon. She was the fifth of six children and was a “Tom Boy” growing-up…climbing trees, chasing buses and being mischievous in various ways. At age 7 Helen’s father was killed in a construction accident and during the ensuing years, mother and children grew and worked together creating a bonding relationship. The family ties were extremely strong and loving among all family members, as the mother cared for and directed their education and upbringing. In 1962, the excitement and allure of America found Helen and a childhood girlfriend traveling across the Atlantic on the Queen Mary to live with relatives in Philadelphia. Later Helen and friend relocated to Allentown, Pennsylvania, where they settled, and Helen met and married Kenneth Lewis. Ken was diagnosed with a brain tumor in July 1967 and passed away in September. Helen met Jerry Allen in July, 1968 in Allentown, married in 1969 and they moved to Houston following his career path. Helen loved Houston and quickly made friends while becoming an enormous aid and partner to Jerry’s career. She was able to travel many parts of the globe an experience she loved as Jerry performed his role as partner in a manufacturing company. Helen was very proud of her Irish heritage and was always happy when joining her family in laughter and dance while listening and singing to Irish songs. These family times made all of us In-laws wonder how a family of this size and distance could be so close and enjoy life so much. The Dixon family children and grandchildren were infected with this spirit and have always had a close relationship, both in America and England. Helen loved sporting activities, particularly tennis and golf. She and Jerry were members of Lakeside Country Club where she was a passionate and competitive tennis player and golfer. Being a wife, mother and grandmother could not have been more satisfying and each of the many summer vacations with her grandchildren was always a wonderful time. Never forgetting and always celebrating important family dates was everything to her. Loyalty was a passion. Her Christmas Eve gatherings with grandchildren and family were very special and can never be forgotten. Helen radiated her warmth and love to everyone she contacted, making it easy to admire and love her in return. She was remarkable in so many ways and will be truly missed and always remembered by family and friends. Helen is preceded in death by her parents Margaret and Frank Dixon and her sister Maureen and brother Danny. She is survived by her husband Jerry Allen, son Michael Allen, grandchildren Rachel and Blake Allen and her sisters, Kathy Rising (husband Ron), San Antonio, Shirley Colquhoun (husband Harry), and brother Michael Dixon (wife Ann), England. The family is grateful for the care and devotion of personnel at The Abbey at Westminster Plaza, (particularly Sandra) and Tradition Hospice personnel (particularly nurse Bonnie). Friends are cordially invited to a visitation with the family from six until eight o’clock in the evening on Thursday, the 10th of January at Dettling Funeral Home, 14094 Memorial Dr., Houston, TX 77079. The Funeral Mass will commence at ten o'clock in the morning on Friday, the 11th of January at St. Catherine of Siena Catholic Church, 10688 Shadow Wood Dr, Houston, TX 77043. A reception will follow Holy Mass. The family will gather for a private burial service at Memorial Oaks Cemetery in Houston.

A beautiful person passed away peacefully on Saturday, December 29, 2018. She was warm, shy, and lovely in acceptable ways. Helen Patricia Dixon Allen, was born in Luton, Bedfordshire, England on October 28, 1941 to Margaret and Frank Dixon.... View Obituary & Service Information

The family of Helen Patricia Dixon Allen created this Life Tributes page to make it easy to share your memories.

A beautiful person passed away peacefully on Saturday, December...

Send flowers to the Allen family.