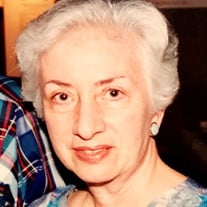 Helen (Eleni) Riquelmy, 87, passed away Tuesday, November 21, 2017. Mrs. Riquelmy was born September 12, 1930, in Athens, Greece to Panayotis and Christina Ktena. Helen is preceded in death by her husband, Charles E. Riquelmy, her parents, and her brother Spyros, and is survived by her children, Christina Riquelmy of Baton Rouge, LA and Edward Riquelmy of Grapevine, TX. She is also survived by her goddaughter Despina Savvaki and her family in Greece. Helen was raised in Athens, Greece. As a young woman, she was active in the Greek YWCA and Girl Scouts, as well as a dance group that performed traditional Greek folk dances. She also studied classical piano. In 1953-54, she spent one academic year in the United States after earning a Fulbright Scholarship, attending Trenton State Teachers College (now Trenton State Univ.), in Trenton, NJ. Upon returning to Greece she worked as a nursery school teacher before marrying her husband Charles in 1958 in Athens, where he was working for an American company. Helen and Charles moved to Houston with their children in 1969 where they spent the remainder of their lives. Mrs. Riquelmy enjoyed reading and knitting, participating in a group with friends from St. Cyril of Alexandria Catholic Church that made blankets and other items to donate to hospitals and the homeless. Her friends and family admired and enjoyed her cooking, especially Greek food and pastries. Helen imparted to her children a love of learning and an appreciation of different cultures and religions. She was a loyal friend who never lost touch with her high school friends from Greece, and enjoyed spending time with family and friends here in Houston. In lieu of flowers, please consider contributions in Helen’s memory to a children’s charity or educational institution of your choice. The Riquelmy family will be present to receive friends Tuesday, November 28, 2017, from 5:00 PM until 6:00 PM with a Vigil Service beginning at 6:00 PM at Dettling Funeral Home, 14094 Memorial Dr., Houston, TX 77079. A Funeral Mass will be celebrated Wednesday, November 29, 2017 at 10:30 AM at St. Cyril of Alexandria Catholic Church, 10503 Westheimer Rd., Houston, TX 77042. Mrs. Riquelmy will be laid to rest in Greenwood Cemetery, Jennings, LA later in the week.

The family of Helen C. Riquelmy created this Life Tributes page to make it easy to share your memories.

Send flowers to the Riquelmy family.