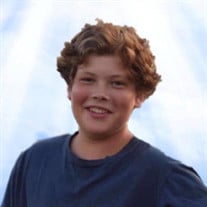 Henry Phillip Davis, 16, died on Thursday, March 14, 2019, after being involved in a tragic automobile accident on Wednesday night. He was born on June 25, 2002, in Houston, Texas to Richard Davis and Laura Cary Davis. He attended Ascension Episcopal School, Hunters Creek Elementary School, Cornerstone Academy, and was a junior at Memorial High School. He was an eighth generation Houstonian and a confirmed member of St. Catherine of Siena Catholic Community. He spent his younger years playing sports and loving baseball at Spring Branch Memorial Sports Association. He also had played lacrosse at Memorial, tennis at HRC and had been active in Cub Scout Pack 704, and Boy Scout Troops 652 and 852. He thoroughly enjoyed fishing with his friends and family. Henry was passionate about cars, learning everything he possibly could about them. He enjoyed photographing cars, making car driving videos, and going to car meets with his car enthusiast friends. In school Henry enjoyed his business, engineering and art classes. He was recently inducted into the Academy of Finance and was pursuing a finance internship this summer. He spent seven wonderful summers at Camp Lonehollow and made so many lifelong friends. He is greeted in heaven by his maternal grandfather, Richard Cary. He has left here his parents, Richard and Laura Davis; sister, Sarah and brothers, Michael and James; grandmother, Kaye Cary; grandfather and grandmother James and Martha Davis; 10 aunts, 10 uncles, 21 cousins, and dear friend, Mina. On March 22, 2019, a memorial service celebrating the lives of Henry and his best friend, Bennett, will be held at 6:30 pm at Houston’s First Baptist Church, 7401 Katy Freeway, Houston, Texas 77024. On March 23, 2019, a visitation will be at 12 noon, with the funeral mass beginning at 1:00 pm, at St. Catherine of Siena Catholic Community, 10688 Shadow Wood Drive, Houston, Texas 77043. Henry was a very kind, compassionate young man. His hugs were meaningful and healing. He was happy to make others laugh and feel better when they were down. He loved his family and friends and was really enjoying life. He was our sweet boy, greatly loved, and will be missed beyond any measure. He was taken from us too young, and we know that he would have continued to develop into an amazing man. Be with God, and we will see you again. In lieu of flowers, Henry would have preferred a donation be made in his honor to St. Catherine of Siena Catholic Community, Houston; The Houston SPCA; or any other cause that is special to you.

Henry Phillip Davis, 16, died on Thursday, March 14, 2019, after being involved in a tragic automobile accident on Wednesday night. He was born on June 25, 2002, in Houston, Texas to Richard Davis and Laura Cary Davis. He attended Ascension... View Obituary & Service Information

The family of Henry Phillip Davis created this Life Tributes page to make it easy to share your memories.