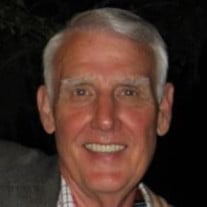 Herschel T. Vinyard Sr, age 81, died peacefully in his home, surrounded by his family, on Tuesday evening, November 10th, 2020. He was born to Herschel and Mamie Rettig Vinyard in Olla, Louisiana. Herschel graduated from LaSalle High School in 1957 and earned a degree in Chemical Engineering from Louisiana Tech University in 1962. While at Louisiana Tech, Herschel was a four-year letterman in football, team captain, and was selected for three years as an All-Conference player. In 2001, he was named to the Louisiana Tech All-Century Football team. Upon graduation, Herschel joined Texas Eastman Company in Longview, TX, and later, ExxonMobil Chemical in Baytown and Houston, retiring in 2000. Herschel enjoyed his hobbies of studying the Bible, vegetable gardening, cooking, woodworking, hunting and fishing, and was most admired for his devotion to his family and faith in God. Herschel is survived by his wife of 57 years, Dorothy (Dot), three sons Herschel Jr (Sharon) of Jacksonville, FL., David (Julie), and Robert (Fred), both of Houston, his four grandchildren, Sarah Reid (Geoffrey), Thomas and fiancée Staci, Hannah (Ethan), Margaret, and great-grandchild, Geoff. Other survivors include his twin sister Helen Gilliam of Lake Charles, LA, and sister Marilyn Salsbury of Baton Rouge, brother and sister-in-law Sarah and Bill Brown of San Francisco, and many nieces and nephews. He is preceded in death by his sister Charmaine Denham of Baton Rouge, and brothers in-law Dallas Salsbury and Giles Gilliam. A Memorial Mass will be scheduled at a later date. Donations may be made in Herschel’s memory to St. Catherine of Siena Catholic Church, 10688 Shadow Wood Drive, Houston, TX, 77043, or Louisiana Tech University Foundation College of Engineering and Science P.O. Box 3183 Ruston, LA 71272. Visit www.DettlingFuneral.com to leave words of condolence for the family.

The family of Herschel T. Vinyard Sr. created this Life Tributes page to make it easy to share your memories.