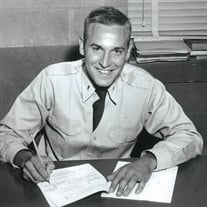 Lt. Col. Hugh Rawl, USAFR (Ret.), 87, of Houston, passed away Saturday, July 20, 2019. Hugh was born July 27, 1931 in Greeneville, TN to Blanche and Elijah Rawl. He is preceded in death by his parents and his brother James. He is survived by his wife of 60 years, Manya B. Rawl, his daughters Lisa M. Rawl (and her husband John Kane) and Arlene Rawl Coffman, his brother William B. Rawl (and his wife Nancy Rawl), and nieces, nephews and extended family. Hugh grew up in Spartanburg, SC, and was a proud graduate of Clemson College, with a degree in Mechanical Engineering. He was a member of the Clemson Corps of Cadets and received his commission in the US Air Force upon graduation in 1952. During his 4 years of active duty, Hugh earned a Masters of Mechanical Engineering from Columbia University in New York and designed HVAC systems for Air Force bases across the U.S. He enjoyed serving in the Air Force Reserve for 35 years, retiring as a Lieutenant Colonel in 1991. Hugh began his career with ExxonMobil in 1952 when it was known as Esso Standard Oil Company and went on Military Leave shortly thereafter. While at Exxon, he held numerous roles as an engineer and in sales and marketing. He met his future wife Manya on a blind date in Baton Rouge, LA, in 1957 and they were married in December 1958. Hugh and Manya moved to Houston in 1966 and spent the next 53 years living in the home they built in Frostwood. Hugh retired from the Marketing Department of Exxon Coal and Minerals in 1993 and put his energy and talent into serving his neighbors and his community. Over the next 25 years, he volunteered as a Board member and President of the Frostwood Civic Club and as a member of the local citizen patrol. While on the Frostwood Board, Hugh became passionate about flood control, working tirelessly with neighbors and local governmental entities to advocate and find solutions for drainage improvements in our area and protect as many people as possible from the risk of flooding. In his spare time, Hugh loved being a shade tree mechanic (when you could still do that). He kept his 1962 Rambler going long past any reasonable expectation and was always happy to help his neighbors and family with their vehicles and air conditioning systems. Hugh was a loving, supportive family man and encouraged Manya, Lisa, and Arlene in all of their pursuits. He enjoyed running and swimming and was an avid fan of our Houston sports teams. Hugh’s life-long love for all things Clemson was well known; he supported Clemson academic programs, planned his Fall weekends around Clemson Football, wore his bright orange shirts with gusto, and always looked forward to Houston Clemson Club events and other alumni activities. Hugh also greatly enjoyed get-togethers with his Exxon lunch bunch, the ExxonMobil Retiree Club – Houston West, and his former Air Force friends. Above all, he loved visiting with his extended family and friends in Houston and throughout the country. Hugh combined all the intelligence, precision, and analytical skills of an engineer with a generous heart, a positive attitude, and a fun-loving soul. He was always willing to give of himself to help others and will be greatly missed by all who knew and loved him. A memorial service will be celebrated on Thursday, August 1, 2019, at 11:00 AM at Memorial Drive United Methodist Church, 12955 Memorial Dr., Houston, TX 77079. A reception will follow services in Friendship Court on the church campus. LTC Rawl will be laid to rest at the Houston National Cemetery at a later date. In lieu of flowers, donations may be made to: The Manya and Hugh Rawl Scholarship Endowment – Fund B2586 or The Manya and Hugh Rawl Air Force ROTC Endowed Grants in Aid – Fund B2585 and mailed to The Clemson University Foundation at PO Box 1889, Clemson, SC 29633 (or by phone at 864-656-5896).

Lt. Col. Hugh Rawl, USAFR (Ret.), 87, of Houston, passed away Saturday, July 20, 2019. Hugh was born July 27, 1931 in Greeneville, TN to Blanche and Elijah Rawl. He is preceded in death by his parents and his brother James. He is survived... View Obituary & Service Information

The family of Lt. Col. Hugh Bailey Rawl created this Life Tributes page to make it easy to share your memories.

Send flowers to the Rawl family.