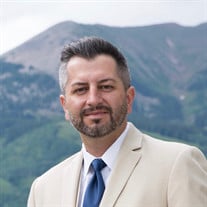 Ivan Nazari, 39, of Houston, Texas, was surrounded by his family and friends as he went to be with the Lord on May 8, 2017; one month shy of his 40th birthday. Ivan was born in Tehran, Iran, on June 8, 1977, to George (Jorj) and Medik Nazari. His family, who are of Armenian decent fled Iran during the revolution and ultimately settled in Houston, Texas. Like his father, he started off as a hair stylist and then moved on to pursue a career as a successful entrepreneur. Throughout his career, he interacted with and touched so many lives. Many of his clients quickly became more than just clients—they became true and fast friends. He had the uncanny ability to connect with people from all walks of life. He was reassuring and could put a smile on anyone’s face. He always had a way of making things just right. His greatest accomplishment however, was his family. He married the love of his life, Christina Weathers Nazari. Together they had two truly amazing boys: Ethan (6) and Noah (2). Ivan took pride and joy in his beautiful family and he embraced being a husband and father. His family was always his number one priority. Whether he was working with his boys to restore his 1987 Saleen Mustang or was playing with them in the yard, he always made time to laugh and share his love and joy with his family. Ivan loved being active in his sons’ lives and always took the time to attend every school activity and sporting event. He coached all of Ethan’s sports teams. He had an amazing way with children and shared with them his competitive spirit, athletic ability, the meaning of sportsmanship, and most importantly his love. As a man he was generous, kind, fun-loving, positive, fearless, forgiving, sincere, genuine, loyal, and a superhero to his boys. He never met a stranger and loved his family and friends fiercely. His connection with each of them was deep and sincere. He put the needs of other first and was the first to come to anyone’s aid. He was the life of the party—once Ivan walked in the room you knew it was going to be a fun day. He wouldn’t have had it any other way. Even in death Ivan’s generosity, strength, and love for others endures. Against all odds and beyond doctors’ expectations, his heart held strong and continued to fight to the end so that he could give others life through organ donation. As a son, a brother, and a son-in law he created a village around his family that is stronger than oak. His connection with each family member was unbreakable and in death his legacy will live forever. His family is proud of the life he lived and the life he created for his wife and sons. He leaves behind his wife Christina, and their sons Ethan and Noah; his mother Medik Erbrick and step-father Robert Erbrick; his sister Christine Rew, her husband Brian Rew and Brian’s two children Sebastian and Lyla; his mother-in-law Vivian Whatley and her husband Darrell Whatley; his father-in-law Paul Weathers and his wife Cindy Weathers; his sister-in-law Mindy Weathers, her husband Brian Mullen and their two children Everly and Emelia. Ivan was proceeded in death by his father George Nazari, who awaits him in heaven with open arms. Most importantly, he was a Christian and we find comfort in knowing that he has joined his father and Heavenly Father in heaven. “The world and its desires pass away, but whoever does the will of God lives forever” (1 John 2:17). A GoFundMe account has been setup to help the family with hospital and funeral expenses. In lieu of flowers and gifts, please consider donating to the fund: www.gofundme.com/in-loving-memory-of-ivan-nazari Funeral services will be held in Ivan’s honor on Wednesday, May 17, 2017 at St. Kevork Armenian Church, 3211 Synott Road, Houston, Texas 77082. Services will begin at 9:00 a.m. followed by the burial and reception. All of his family and friends are invited to attend.

Ivan Nazari, 39, of Houston, Texas, was surrounded by his family and friends as he went to be with the Lord on May 8, 2017; one month shy of his 40th birthday. Ivan was born in Tehran, Iran, on June 8, 1977, to George (Jorj) and Medik Nazari.... View Obituary & Service Information

The family of Ivan Nazari created this Life Tributes page to make it easy to share your memories.

Ivan Nazari, 39, of Houston, Texas, was surrounded by his family...

Send flowers to the Nazari family.