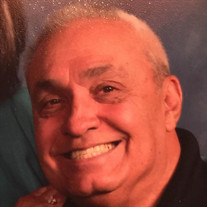 J. Mark Jensen, Sr. passed away on September 28, 2016, surrounded by his devoted family. He was born on October 14, 1949, in Mt. Vernon, Ohio. He attended Bellaire and Marian High Schools and the University of Houston. He was retired from owning a small business that catered to the building industry. Mark was known for his smile that was a mile-wide, his infectious laugh, electric sense of humor, ability to never meet a stranger, and his kind and gentle heart. He was truly larger than life. Mark’s personality and smile were huge, but his heart was even bigger. His positivity was contagious, and his hilarious character was such a blessing to all those around him. He will forever be missed by the family that he loved and cherished so much. He spent many years selflessly donating his time and energy to coaching his children’s teams in the Katy Girls Softball Association, Katy Youth Football, Katy Youth Basketball, and Bear Creek Little League, just to name a few. He coached and mentored countless athletes, always seeing the special potential in each one. As his kids grew older, Mark picked up many other activities to do in his free time. He enjoyed giving his time and service to St. John Vianney Catholic Church, going on travel adventures with his wife, supporting all of his grandchildren’s sports and activities, crooning tunes, cooking, and watching his beloved Houston teams, especially the Astros. For Mark, the most important thing in his life was his family. He was preceded in death by his father, James Neal Jensen, Sr., father-in-law, Leonard J. Heffler, and mother-in-law, Charlotte. He is survived by his mother, Juanita June Jensen, Denise, his wife of 46 years, his children, Julie (Ray) and J. Mark, Jr. (Sonya), and his grandchildren (the lights of his life), Kellie, Kendall, J. Mark, III, and Cole. He is also survived by his big sister, Diana Schamp and husband Jerry, and his brother (and life-long best friend), James Neal Jensen, Jr. and wife Gail. He was beloved by his many nieces, nephews, cousins, and countless family friends. The Jensen family will be present to receive friends Tuesday, October 11, from 6-8 pm with a Vigil Service beginning at 7:00 PM at Dettling Funeral Home, 14094 Memorial Dr., Houston, TX 77079. A funeral mass will be celebrated at St. John Vianney Catholic Church, on Wednesday, October 12, at 10:30 am, 625 Nottingham Oaks Trail, Houston, TX 77079. Immediately following the funeral mass, there will be a reception at the church reception hall. The family will hold a private graveside burial later that afternoon. To send flowers, or a memorial gift, to the family of J. Mark Jensen, Sr., please visit our sympathy store.

J. Mark Jensen, Sr. passed away on September 28, 2016, surrounded by his devoted family. He was born on October 14, 1949, in Mt. Vernon, Ohio. He attended Bellaire and Marian High Schools and the University of Houston. He was retired from owning... View Obituary & Service Information

The family of J Mark Jensen Sr. created this Life Tributes page to make it easy to share your memories.

Send flowers to the Jensen family.