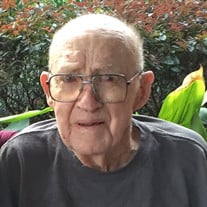 Panhandle, Texas – Jack Ramey (95 years old) graduated from this earth to his Heavenly home on Friday, June 24, 2016. He was born on the family farm on January 10, 1921, to Thomas Barrett Ramey and Dessa Murrah Jackson Ramey. He is survived by his son, Dan Ramey and his wife, Mary, from Houston, Texas. He is also survived by his loving grandchildren, Michael Ramey and wife Kenzie from Dallas and LeeAnn Ramey from Houston along with numerous nephews and nieces. Jack grew up in Panhandle, Texas on the family farm. He graduated from Panhandle High School in 1938. He worked in Panhandle until June 1942, when he joined the U.S. Navy to serve his country in World War II. After basic training in Great Lakes, Chicago, Illinois, he served in the Pacific Theater with the Navy and Marines until he was honorably discharged in December 1945, as a Hospital Corpsman 1st Class. His medals include Purple Heart, Oak Leaf Cluster, and Good Conduct. In 2002, Jack was inducted into the Freedom Museum of Honor. During a train trip through Chicago on a leave from the Navy, he met Sue Odle, also in the Navy, at the Dearborn train station. They were married at the First Baptist Church of Panhandle, Texas, on June 1, 1946. Jack and Sue had 69 wonderful years of marriage together before Sue’s passing in July 2015. Jack was very well known for his practical jokes and pranks and always had a happy greeting, a wave, and a smile for everyone he met. Underneath that exterior was a man who was dedicated to God, his country, his family, Panhandle, and the well-being of his fellow man. In 1953, he purchased the Gulf Oil Distributorship that he and Sue ran until they retired in 1992. Jack was an avid farmer and rancher and was always willing to share his agricultural knowledge with others. Jack was awarded “Outstanding Service to Agriculture” in 1990 and he and Sue were awarded “Farm Family of the Year” in 1988. His other community service included Panhandle School Board Member, President of Lion’s Club, President of Carson County Junior Livestock Show, and County Election Judge for many years. Jack had been a member of First Baptist Church of Panhandle since he was 11 years old. Jack was also one of the pioneers of wind energy in the Texas Panhandle. He was the first landowner in the area to embrace the current Panhandle Wind project and as a result, the substation that consolidates the power generated by all the Panhandle Wind towers, was named the Jack Ramey Substation. The family would like to thank the staff at Buckner Parkway Place Skilled Nursing Unit and the Buckner Hospice team for their extraordinary care for Jack. The family asks that in lieu of flowers, memorial contributions be made to the First Baptist Church of Panhandle, Texas Youth Activity Center Fund in memory of Jack Ramey. A private celebration of his life was held in Houston, Texas, under the direction of Dettling Funeral Home. Interment was at the Houston National Cemetery with Navy honor guards. “My sweet grandpa, “Papa Ramey,” was truly one of a kind. He committed his life to his family, his friends, his country and his Lord and Savior. He was such an incredible husband, father, grandpa and friend. Bringing him Hershey bars, playing Bingo together and watching him take care of everyone around him are my favorite memories of him. I will miss him so much, but will celebrate his 95 years of life and will always remember all the laughs we had together. I couldn’t be more proud to call him my grandpa. Papa, love you so much. See you and Mama again one day! With so much love, LeeAnn.”

Panhandle, Texas &#8211; Jack Ramey (95 years old) graduated from this earth to his Heavenly home on Friday, June 24, 2016. He was born on the family farm on January 10, 1921, to Thomas Barrett Ramey and Dessa Murrah Jackson Ramey. He is survived... View Obituary & Service Information

The family of Jack Ramey created this Life Tributes page to make it easy to share your memories.

Send flowers to the Ramey family.