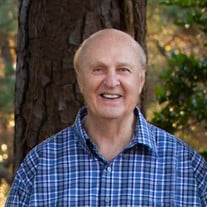 On February 15, 2022, James Courtney Culpepper met his Lord and Savior Jesus Christ. He was a devoted husband, father, grandfather, uncle and friend. James "Jim" Courtney Culpepper was born July 31, 1940, in Okmulgee, Oklahoma. Raised with the name Courtney, he was also called Jim by many of his friends and associates. He was preceded in death by his parents R.C. and Betty Culpepper, brothers Ronald and Wayne Culpepper. He is survived by wife Janette Culpepper, who he married July 25, 1964, daughters Cory Lynn Posell and Kimberly Ann Culpepper-Whitaker (sons-in-law Scott Trent Posell and Mark Allyn Whitaker); grandchildren Parker Lynn Posell, Payton Leigh Posell, and Scott Trent Posell II; nieces and nephews; and great-nephew Logan Samuel Jones, who lived with Jim and Janette throughout junior high and high school and now serves in the US Navy. In 1947, Jim's family moved from Okmulgee to Old Ocean, Texas, when his father was transferred by Phillips Petroleum Company to the Old Ocean refinery. Upon graduating from Sweeny High School at age 17, Jim enlisted in the United States Air Force for four years. Two of those years were spent at Johnson Air Force Base in Tokyo, Japan, and he finished his tour of duty in Abilene, Texas. Probably only by providence, he met and became great friends with his Uncle Bruce and Aunt Helena while stationed in Japan -- there had been no contact between his dad and his brother in 46 years. After marrying Janette, he attended the University of Houston majoring in Behavioral Management Services. Jim spent most of his career in the corporate sector, working in various management positions. In 1998, he joined the Bill Moore Team at Re/Max Southwest as a Realtor. When Jim was Personnel & Labor Relations Manager for the Houston Chronicle, he actually hired Bill Moore when he was just 16 to work part-time. Jim was a groomsman in Bill and Lynn’s wedding, and later in life worked closely with Bill and Lynn’s three sons Jason, Charlie, and Mike, who have all been lifelong friends. Early on in their marriage, Jim decided to spend most of his life volunteering. He served as PTO President of the elementary, middle, and high schools where his daughters, Cory and Kim attended. Even though he had no sons, he had a deep love for baseball and mentoring young men, so he managed and umpired Little League Baseball for 17 years and was the Assistant District Administrator for District 16 Little League. It was there that he met Jack and Sue Manning who became, and are still today, Jim and Janette’s closest and dearest friends. For the last 40 years, they have enjoyed going out to dinner and playing bridge almost every Friday night and have also shared many vacations together including numerous cruises which they always looked forward to. Jim also served on the Board of Governors for The Center Foundation, now called The Center for Pursuit, for 17 years, an organization that serves persons with mental retardation. He was blessed by the opportunity to serve two terms as President. His true fulfillment, however, was the nearly 6 years he spent doing prison ministry at the Carol Vance Prison in Richmond, Texas, each Tuesday evening. His final volunteer assignment was serving at C.H.A.R.M. Ministries each Wednesday evening as a mentor for men paroled who were staying at one of the seven C.H.A.R.M. half-way homes. Those men he mentored at the prison became his brothers in Christ and he loved each and every one that came into his life. He would often refer to many of them as “the finest Christian man I’ve ever known.” Jim was a good friend to so many, but he especially cherished the lifelong friendship of 73 years he shared with Tuck Murray, who Jim would often refer to as his best friend. Among many things, they enjoyed studying God’s Word together and often talked about being together forever in God’s Kingdom. Jim made it his mission in life to tell others about Jesus so that they too could spend eternity in heaven. Everyone that knew Jim knew that his family meant more to him than life. Every event, big or small, beginning with his own children and throughout the lives of his grandchildren, was a priority to him and he made every effort to be present at everything. Some even joked that he attended things he was not invited to just to be with his family. Life will never be the same without him but the legacy he leaves behind will last forever. In lieu of flowers, please donate to C.H.A.R.M. Ministries. https://charmprisonministry.org/donate/

The family of James Courtney Culpepper created this Life Tributes page to make it easy to share your memories.

Send flowers to the Culpepper family.