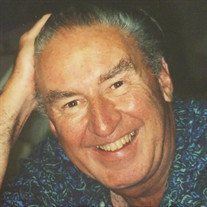 James Hastings DeNike passed peacefully in Dallas, TX on January 18, 2021. Jim was born on March 12, 1932 at Lutheran Hospital in Manhattan, NY to Redmond and Louise DeNike. After his parents passed early in Jim’s life he was raised by George and Christina DeNike. Jim graduated St John’s University in 1953 cum laude with a BS degree in chemistry. He immediately got a job with Shell Chemical Co. as a chemist in Deer Park, TX. Ironically, he was drafted by the army the following year and trained to be a medic at Fort Sam Houston in San Antonio. Jim moved with Shell to Houston, TX in 1970 and he rose up the ranks to become Vice President of Shell Oil when he retired in 1991. Jim and his wife Dorothy were active members of the Catholic Diocese of Houston and specifically St. Cecilia’s parish. Over the decades he was active in Sam Houston Council, B.S.A., Serra Club of Houston and helped found Houston Chapter of St. John’s Alumni. Jim was a loving husband, father, grandfather and great grandfather. He is preceded in death by the love of his wife Dorothy Post, son William and sister Joan DeNike Donovan. Jim is survived by his six other children, James R DeNike, Mary DeNike, Ann D Clark, Jane L DeNike, Frances C DeNike, Patricia D Jones, his cherished grandchildren, Sarah DeNike, Natalie DeNike, Clara Zavani, Jaime DeNike, Jack and Daphne Jones and great grandchild Liam Jedlicka. In lieu of flowers please consider a donation to the Serra Club of Houston or the Alzheimer’s Association (act.alz.org/donate). The Funeral Mass celebrating Jim’s life will be held Friday, January 29, 2021 at 10:00 AM at St. Cecilia Catholic Church, 11720 Joan of Arc Dr., Houston, TX 77024. Mr. DeNike will be laid to rest at Memorial Oaks Cemetery following Holy Mass. Due to COVID concerns the mass will also be live streamed at the following link: https://youtu.be/RwKlGyEJArc

James Hastings DeNike passed peacefully in Dallas, TX on January 18, 2021. Jim was born on March 12, 1932 at Lutheran Hospital in Manhattan, NY to Redmond and Louise DeNike. After his parents passed early in Jim&#8217;s life he was raised... View Obituary & Service Information

The link for steaming services on Friday, January 29, 2021 beginning at 10:00 AM is https://youtu.be/RwKlGyEJArc

Send flowers to the DeNike family.