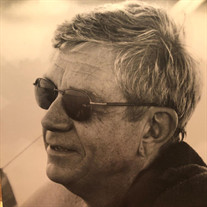 On Tuesday, April 14, 2020 James (Jim) Wadsworth Fairchild, Jr. passed away after a long and hard-fought battle with cancer at the age of 79. Jim was born April 19, 1940 in Olean, New York. He is preceded in death by his father, James Wadsworth Fairchild, and his mother, Evelyn Swanson Fairchild, and his brother, Bruce Tillotson Fairchild. He is survived by his wife Patricia Ryan Fairchild; his three children, Mark Stephen Fairchild and wife Stacie, Brian Kevin Fairchild and wife Ingrid, Debra Suzanne Fairchild Mullinax and husband Andy; his brother Leslie Swanson Fairchild and wife Macklyn; his grandchildren, Lauren Elaine Fairchild, Colin Scott Fairchild, Palmer Kane Mullinax, Rylie Morgan Mullinax, and Marlee Annette Mullinax; his stepchildren, William Matthew Ryan, Megan Emily Ryan Strange and husband Casey, John Patrick Ryan; his step grandchildren; Hattie Mila Strange and Shepard James Strange. Jim spent his formative years in Portville, New York and Lake Hamilton, Florida where he enjoyed water skiing on Lake Sara with his brothers, and working alongside his father in the family’s citrus groves. He received both his B.S. (1963) and M.S. (1965) in Mechanical Engineering from the University of Florida where he was a proud member of the Fightin’ Gator Marching Band. Jim founded Fairchild & Associates, Inc. and was considered a world-renowned natural gas reservoir storage expert. He was a registered Professional Engineer, and a member of the Society of Petroleum Engineers. He loved his work, traveling, spending time at his cabin in the mountains, and collecting and enjoying fine wine. He was the consummate host and never met a stranger. He was also known for his generosity and heart of gold. Instead of flowers, the family requests an honor donation to the American Cancer Society or the charity of your choice. In lieu of a service, we ask that family, friends, and loved ones raise a glass to Jim on Sunday, April 19th to celebrate and wish him a Happy Birthday.

On Tuesday, April 14, 2020 James (Jim) Wadsworth Fairchild, Jr. passed away after a long and hard-fought battle with cancer at the age of 79. Jim was born April 19, 1940 in Olean, New York. He is preceded in death by his father, James Wadsworth... View Obituary & Service Information

The family of James Wadsworth Fairchild created this Life Tributes page to make it easy to share your memories.

Send flowers to the Fairchild family.