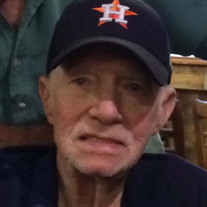 James Hugh Fairly, Jr., 84, of Pasadena, TX, went to be with our Lord on Monday, December 28, 2015. Jim was born February 8, 1931 in Teague, Texas to James, Sr. and Emma Fairly. He is preceded in death by his loving wife, Jeanne, his parents, son, James William Fairly, sisters, Betty Huffman and Patsy Neal. Jim is survived by his brother, Gary Fairly & wife Martha; his children: Jeannine Fairly & partner Tammy Carroll; David Fairly; Gloria Baker & partner, Rick Webb; Frank Fairly & partner, Jennifer Brown; Richard Fairly; grandchildren: Ginger Gibson; David Fairly, Jr.; Katrina Fairly; Samantha Fairly; Amber Uttecht and husband Gavin; Jacob Brown; great grandchildren: Samuel Fairly; Emily Fairly; Michael Gauntt; Kaitlyn Gauntt; Stephen Gauntt; Hayden Moreno; Sasha Brown; Dakota Fairly; great great grandchildren Joshua Fairly & Travis Fairly and numerous nephews and nieces. Jim grew up in Teague, Texas and after graduating High School, enlisted in the U.S. Navy. He is a veteran of the Korean War. While on fleet week in New York, Jim met the love of his life, Jeanne, while strolling about Coney Island. They married in September of 1955 in New York, moved to Houston, Texas, and eventually to Pasadena where they became loving parents to 6 children. Jim loved his family more than anything. He was a great provider to them, as he worked for over 30 years with the S.S. Kresge Company. He was also an awesome cook. He always looked forward to grilling and cooking for family gatherings and celebrations. One of his most favorite times was on Christmas mornings while everyone was opening gifts and at his insistence, he would be cooking breakfast for everyone. Not only did he enjoy cooking and grilling out, he also loved preparing and taking care of his vegetable garden, keeping his lawn looking nice, fishing and hunting. Jim was a convert to the Catholic faith and was a very devout Catholic. Along with his wife, Jeanne, he was an active member for 50 years at St. Augustine Catholic Church. He served his parish as a Greeter, Parish Council Member; was active in the Men’s Group and on the Parish Building Committee. One of his most favorite parish events was the annual Fall Bazaar at which along with his wife, Jeanne, they served as leaders for many years. In his retirement years, Jim enjoyed keeping up with his garden and lawn and enjoyed watching sports. He also loved playing the lotto and watching old western movies, especially movies featuring his favorite actor, the “Duke”, John Wayne. He also enjoyed weekend and holiday visits from his kids and grandkids! The family would like to offer our sincere gratitude to Jessica Flores, who was our parents’ loving and devoted caretaker for the past few years. We also would like to thank the doctors and nurses at Houston Methodist Hospital. The Fairly family will be present to receive friends Sunday, January 3, 2016 from 2:00 PM until 4:00 PM at Dettling Funeral Home, 14094 Memorial Dr., Houston, TX 77079. The Funeral Mass will commence Monday, January 4, 2016 at 10:30 AM at St. John Vianney Catholic Church, 625 Nottingham Oaks Trail, Houston, TX 77079. A reception will follow Holy Mass in St. Jude Hall on the church grounds. Mr. Fairly will be laid to rest in Forest Park Lawndale Cemetery following the reception.

James Hugh Fairly, Jr., 84, of Pasadena, TX, went to be with our Lord on Monday, December 28, 2015. Jim was born February 8, 1931 in Teague, Texas to James, Sr. and Emma Fairly. He is preceded in death by his loving wife, Jeanne, his parents,... View Obituary & Service Information

The family of James Hugh Fairly Jr. created this Life Tributes page to make it easy to share your memories.

Send flowers to the Fairly family.