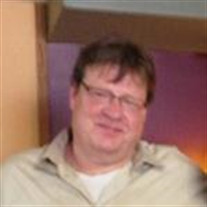 James Price Gent, age 57, passed away peacefully in his sleep November 10, 2020 after a long illness. James was born on the 10th day of the 10th month and weighed 10 pounds to J Stewart and Julie Gent in Houston, TX. His childhood was a happy one growing up in the Westridge area of Houston. James was a lifelong sports fan, and grew up going to many Astros, Rockets, and even Houston Oilers games. But his favorite team was his beloved Cowboys that he followed closely through the years. He parlayed his love of football, great agility, and large countenance into a football scholarship to Marian Christian Catholic High School in Houston, TX. James had a lifelong passion for service—he would often mention that it was one of his “spiritual gifts.” He was particularly proud of the years he devoted as an employee at Astroworld, which led to his ongoing career in the restaurant industry. He also served as a freelance restaurant consultant and technical writer. One of his proudest accomplishments was a song that was composed and published as a vocal solo taken from a eulogy he wrote for and named after his beloved dog, “Emily Morgan Gent”, and later a choral setting was produced from this song and text. But James felt that his greatest accomplishment was his only child, Jared Baxter Gent, whom he loved with a gentleness and pride few could equal. Like himself, he loved large and when Jared was three years old, he met the girl he was to spend the next 20 years with, Keira Knecht. There was a connection right away, and the minute they met and he found out that she was a classically trained soprano, he lightly touched her hair and said without hesitation, “I think I’m in love.” James also struggled with mental illness and depression and like many of those without resources, he treated his illness through self-medication. Thankfully, he was to finally conquer the struggle with addiction that lasted through a lot of his adult life. His battle came to a head in the early 2000’s and although he tried many programs and went into and out of recovery, not until he was introduced to Celebrate Recovery did he experience a conversion and what was to become his saving grace. Upon completion of Celebrate Recovery and entering full sobriety, he entered RCIA (The Rite of Christian Initiation of Adults) and in 2014 fulfilled his dream of becoming a full member of the Catholic Church. James was also further moved by his experiences with the ACTS retreats--and this experience had a profound effect on him as well. He credits his sobriety with a life in Christ and the continued comfort of receiving the Eucharist. James is survived by his partner, Keira Nell Knecht, his son Jared Baxter Gent and his girlfriend Rachel Schwartz, his mother Julie Enna Gent, and his sister Joellen Gent and her husband Bill White and their sons Liam Porter White and Aidan Christopher Gent, another sister, Melissa and her husband Addam Walker and family. He is preceded in death by his father J Stewart (Gent) Alteapor, and grandparents Sam and Judy Stringfellow and Frank Howard Weidman, Jr. and James and Almeda Gent. A funeral mass will be held for James on December 4, 2020 at St. John Vianney Catholic Church at 1:30pm. To send flowers or a memorial gift to the family of James Price Gent please visit our Sympathy Store.

James Price Gent, age 57, passed away peacefully in his sleep November 10, 2020 after a long illness. James was born on the 10th day of the 10th month and weighed 10 pounds to J Stewart and Julie Gent in Houston, TX. His childhood was a happy... View Obituary & Service Information

The family of James Price Gent created this Life Tributes page to make it easy to share your memories.

James Price Gent, age 57, passed away peacefully in his sleep...

Send flowers to the Gent family.