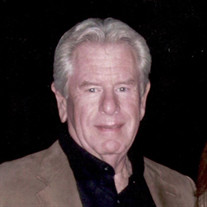 Jim Meyers, 77, of Cypress, Texas passed away Saturday, September 2, 2017. Jim was born February 26, 1940 in Rock Island, Illinois. He is survived by his wife of 15 years, Dianne Meyers; children, Amber Meyers, Dyrke Meyers; step-children, Laura Oeschler, Rebecca van Es, Steve Oeschler, Kimberley Black; grandchildren, AJ, Courtney, Benson, Lakin, Leo and Kelsie. He is also survived by his sister Judy and many extended family and dear friends. Jim grew up in the Los Angeles, CA area. He attended Loyola University where he earned his Bachelor of Science in Chemical Engineering. He worked for KBR Halliburton for more than 30 years. His work in the oil and gas industry brought him and his family to Houston. Jim enjoyed traveling and taking cruises all over the world. He also enjoyed sports, gambling and the stock market. Jim was a man of great faith, he attended St. John Vianney Catholic Church for many years and was active in the parish. Jim loved spending time with his grandchildren at Disneyland and on the soccer field as well. He was loved by those who knew him and will be greatly missed. The Meyers family will be present to receive friends, Sunday, September 10, 2017 from 2:30 PM until 3:00 PM with a Rosary being recited at 3:00 PM at Dettling Funeral Home, 14094 Memorial Dr., Houston, TX 77079. The Funeral Mass will commence Monday, September 11, 2017 at 10:30 AM at St. John Vianney Catholic Church, 625 Nottingham Oaks Trail, Houston, TX 77079.

The family of James Eugene Meyers created this Life Tributes page to make it easy to share your memories.

Send flowers to the Meyers family.