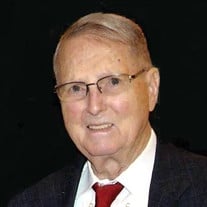 James Ralph Naylor of Houston passed peacefully, surrounded by his family on January 22, 2019 after a lifetime of service to his country, family and faith. Known to friends and family as Ralph, he was born James Ralph Pemberton III on Dec. 11, 1929 to James and Ida Pemberton of Spaulding, IL. He never met his birth father who died unexpectedly during his mother’s pregnancy. Ralph changed his last name when his mother later married Harry John Naylor, who took good care of the youngster and raised him as his own son. Ralph attended Riverton, IL High School where he was an outstanding student and standout basketball player, a sport that would become a lifelong passion. It was at one of his games against a rival high school that he met a lovely cheerleader named Joyce who would go on to become his wife of 67 years. Ralph’s college career began at Illinois State University. After receiving his Bachelor of Science degree, he attended Millikin University where he received a Master of Science in Physics. He married his high school sweetheart, Joyce Barbara Cooper, in 1951 who helped the young couple make ends meet during the lean college years. At the time of his graduation the US was involved in the Korean Conflict. Ralph was drafted into the Navy and was sent to the New London CT submarine base for his active duty where he was assigned to the Engineering and Repair Division. After completing his tour of duty, he received a direct commission as an LT j.g. Intelligence Officer, USNR, Glenview Naval Air Station in suburban Chicago. He and Joyce settled in nearby Hoffman Estates where they raised their three sons. Ralph served for 22 years in the Naval reserve and retired with the rank of Commander. Ralph was a lifelong school teacher and athletic coach. In 1963, Forest View High School opened in Arlington Heights, IL and Ralph was hired to teach physics and physical science. He also coached a variety of sports, including men’s basketball and baseball, as well as women’s basketball and volleyball. Over the years he mentored and coached hundreds of young men and women who left school smarter and wiser than when they arrived. His former students include bestselling author Jerry B. Jenkins, who stayed in touch with Ralph and always sent signed copies of his latest books. Ralph taught at Forest View High School until its closing in 1986, one of only four teachers there from opening day until the closure. He then taught at Rolling Meadows High School and Mt. Prospect High School until he retired in 1995. Ralph was also an avid fisherman, receiving tremendous enjoyment from landing large-mouth bass – though not as frequently as he would have preferred. During his youth he was introduced to- and fell in love with the many lakes in the Ozark Mountains of Missouri. He later built a beautiful house on Table Rock Lake where the family spent many summers fishing, waterskiing and creating wonderful memories. In 1995, Ralph and Joyce traded the harsh winters of Chicago for the steamy summers of Houston where they have since developed many great friendships through Second Baptist Church and their many other activities. James Ralph Naylor is survived by his wife of 67 years, Joyce Barbara; his sister Dorothy Taft of Rochester, IL; his sons Chris Naylor of Houston, Stan Naylor of John’s Creek, GA, Rick Naylor of Houston; three grandchildren Lauren Naylor-Yost, David Naylor, Sean Naylor; and two great grandchildren. A visitation will be held Sunday January 27th from 1:00 – 3:00 pm with a service at 3:00 pm, both at Dettling Funeral Home in Houston. There will be a military funeral honors ceremony at VA Houston National Cemetery on Monday Jan. 28th at 12:30 pm.

James Ralph Naylor of Houston passed peacefully, surrounded by his family on January 22, 2019 after a lifetime of service to his country, family and faith. Known to friends and family as Ralph, he was born James Ralph Pemberton III on Dec.... View Obituary & Service Information

The family of James "Ralph" Naylor created this Life Tributes page to make it easy to share your memories.

Send flowers to the Naylor family.