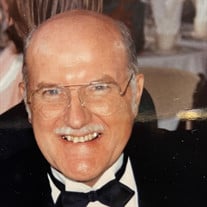 James Paul “Jim” Stanton, M.D., passed away, peacefully, at the Dell Seton Medical Center in Austin on March 21, 2022. Dr. Stanton was born on October 25, 1926, in Trenton, NJ, the only son and fourth child of James and Helen Erb Stanton. He graduated from Trenton Catholic High School before serving in the U.S. Navy Medical Corps. Following completion of his military service, Jim returned to Mount St. Mary’s College in Emmitsburg, MD, matriculating to medical school after only three years of undergraduate work in response to a shortage of physicians in the United States following World War II. Jim earned his medical degree from Georgetown University Medical School in Washington, DC, and was awarded his undergraduate degree years later. Dr. Stanton established himself as a premier clinician and compassionate hand for his patients over a distinguished medical career that spanned five decades, working and teaching in two of the world’s renowned medical research hubs – Boston and Houston. Focusing on internal medicine and later branching into the then-emerging specialty of gastroenterology, Dr. Stanton served his internship at St. Francis Hospital in his hometown of Trenton before residencies in radiology at the Massachusetts General Hospital, and in internal medicine at the Leahy and Joslin Clinics in Boston. He eventually built a thriving private practice in Norwood, MA, where he also served as a staff member in the internal medicine department of Norwood Hospital, and as an associate clinical professor on the faculty of the Tufts Medical School. In 1978, Dr. Stanton and his family moved to Houston, where he joined the Ledbetter Clinic practicing in affiliation with the Twelve Oaks (now River Oaks) Hospital. During seven years at Ledbetter, he built the clinic’s internal medicine and gastroenterological subspecialty practice. In 1985, he returned to private practice, where he served patients for nearly 20 years in affiliation with Memorial Hermann Southwest Hospital until his retirement in 2002 at age 76. Throughout his career, Dr. Stanton was as passionate about sharing his medical expertise and knowledge with peers and students as he was about clinical practice. In addition to his tenure on the Tufts Medical School faculty, he also taught at the Georgetown and Harvard Medical Schools. He was an active member and participant in medical boards and associations within his specialty and professional communities. Dr. Stanton served as president of the Houston Gastroenterological Society in 1988. Jim loved nature as much as medicine, finding renewal and joy in the outdoors and outdoor recreational pursuits, including hunting, fishing, shooting, and camping. Many of the family’s vacations featured these activities, making for memorable moments in Alaska, Maine, Cape Cod and the Virgin Islands. He loved sailing, owning several boats, and becoming an expert navigator. Jim also answered the call to the sky, earning his pilot’s license in the 1980s and enjoying aerial adventures, such as, flying from Houston to the Jersey shore and elsewhere. Dr. Stanton was predeceased by his beloved wife of 59 years, Alice Catherine Hughes Stanton, and grandson Peter Stanton, as well as sisters Helen Stanton, Catherine Devine, and Alice Masker, brothers-in-law Donald Devine, Edward Masker, Richard Caldwell, Vito Brenna, and Robert Golembiewski, as well as sisters-in-law Anne Hughes Brenna and Margaret Hughes Golembiewski. He is survived by sister Grace Caldwell, as well as his five children and their spouses, including David Stanton (Lisa) of Newport Beach, CA, Carol Stanton Meier of Princeton, NJ, Mark Stanton (Susan) of Chapel Hill, NC, Barry Stanton (Jill) of Birmingham, AL, and Joan Hendrix (Hammond) of Austin, TX. He also is survived by nine grandchildren, three great grandchildren, and many nieces and nephews. Visitation will be held on Wednesday, March 30, 2022, from 6:00 to 8:00 PM (CT), at the Dettling Funeral Home, 14094 Memorial Drive in Houston. A vigil will be held at 7:00 PM. A Mass of Christian burial will be held on March 31, 2022 at 10:30 at St. John Vianney Catholic Church, 625 Nottingham Oaks Trail in Houston. The Mass of Christina burial can be viewed by following this link https://www.funerallivestream.org/event-details/funeral-service-for-james-paul-stanton-m-d. In lieu of flowers, donations may be made to EWTN (https://www.ewtn.com/missions/love-and-understanding-of-god-1?src=navbtn) or Doctors Without Borders (https://www.doctorswithoutborders.org/).

Follow this link for Livestreaming of the Funeral Mass: https://www.funerallivestream.org/event-details/funeral-service-for-james-paul-stanton-m-d

Send flowers to the Stanton family.