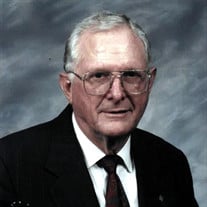 James Couch Upchurch passed away peacefully at his home June 1, 2018. He was 90 years old. Jim was born August 18, 1927 in Italy, Texas to the parents of Ida V & Thomas Walter Upchurch. He is survived by his wife of 66 years, Minerva, his sister Betty Easter and three children: Thomas Hayne Upchurch (Elizabeth) of Brenham TX, Laura Ellen Banowsky (Bill) of Austin TX & Susan Elizabeth Rutledge (Tim) of Dallas TX, and nine grandchildren: Kyle Banowsky, Alison Banowsky, Ben Banowsky, Seth Rutledge, Allister Rutledge, Brennan Upchurch, Wilson Upchurch, Emily Crawley and Thomas Hayne Upchurch Jr. Raised on his parent’s farm, Jim graduated from Italy High School in 1944. He enrolled in college at the age of 16, but his schooling was postponed for service in the US Navy. Upon his return, Jim continued his education earning Bachelor and Master degrees in Chemical Engineering from the University of Texas at Austin. Active in UT’s intramural sports program, he received the Athlete-of-the-Year award in 1951. Jim attended University Christian Church in Austin where he first met Minerva. 1951 was a big year for Jim. He began his career with Union Carbide Corporation on March 31st and on September 22nd he married Minerva at UCC. They lived in Texas City until being transferred to Houston in 1967. Jim enjoyed a career of 42 years with Union Carbide Corp., specializing in distillation technology and equipment design. Jim was a member of the American Institute of Chemical Engineers (AIChE). He received the Outstanding Young Member award of the South Texas Section in 1961 and he was honored to be elected as a Fellow of the AIChE in 1986. Jim was a lifelong member of the Christian Church, Disciples of Christ. He served as building chair for the construction of two new churches. The first, for the relocation of First Christian Church in Texas City in 1963 and for Memorial Drive Christian Church in Houston in 1971. He served in many leadership roles at MDCC. Jim enjoyed his ranch in Elkhart, Texas where he raised cattle. For a period of time, he grew vegetables in that East Texas sand, continuing his lifelong passion for gardening. Jim was an avid sports fan, enjoying season tickets to Texas Longhorn football and Houston Astros baseball games. A committed family man, Jim was a loving husband, father, grandfather, brother and friend. Generous with his time for others, Jim enriched the lives of all who knew him. The family wishes to thank Maria Rivera, Melissa Shetto, Melvia Williams, the Talbot family and our neighbors for their loving care. A Memorial service is scheduled for 11:00 AM Thursday, June 7th, 2018, at Memorial Drive Christian Church, 11750 Memorial Drive, Houston, TX 77024. An inurnment service will be held 10:30 AM on Saturday, June 9th in Italy, Texas. In lieu of flowers, memorial gifts may be made to the Memorial Drive Christian Church. Visit www.DettlingFuneral.com to leave words of condolence for the family.

James Couch Upchurch passed away peacefully at his home June 1, 2018. He was 90 years old. Jim was born August 18, 1927 in Italy, Texas to the parents of Ida V & Thomas Walter Upchurch. He is survived by his wife of 66 years, Minerva, his sister... View Obituary & Service Information

The family of James Couch Upchurch created this Life Tributes page to make it easy to share your memories.

James Couch Upchurch passed away peacefully at his home June...