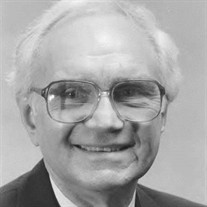 James Edward Upton, 85, of Houston, Texas, passed away on Saturday, January 30, 2016. James was born on April 22, 1930, to James Archie Upton and Lola Gladys Ozment Upton, in El Dorado, Arkansas. James is survived by his wife of sixty years, Betty Jo Walker Upton; daughter, Mary Upton Wilson, of Shreveport, Louisiana; daughter, Lola Meinardus and son-in-law Russell, of La Grange, Texas; daughter, Claudia Precure, and son-in-law, Richard, of Oklahoma City, Oklahoma; daughter Laura Upton Harris, of Oklahoma City, and eighteen beloved grandchildren and great-grandchildren. James is also survived by one brother, Ronnie Joe Upton, and sister-in-law Betty Wages Upton, of Tupelo, Mississippi, and countless nieces and nephews. James served his country in the United States Army during the Korean War; he reported to the Selective Service Local Board in Columbia, Mississippi, on September 22, 1954, was stationed for active duty for two years at Brooks Army Medical at Fort Sam Houston, in San Antonio, Texas, and was honorably discharged from the United States Army Reserves on August 31, 1962, while in New Orleans, Louisiana. James received his B.A. in Petroleum Engineering from Louisiana State University, Baton Rouge, and completed his M.B.A. at Oklahoma City University, Oklahoma City. James spent most of his career in Exploration and Production with Gulf Oil Corporation, and retired with Chevron U.S.A., in 1990. James was a Legion of Honor Member of the Society of Petroleum Engineers, for his over fifty year membership, and his career-long service to the petroleum industry and the petroleum engineering profession. James’ employees spoke of him as intelligent and fair manager, who didn’t ask of them anything that he would not have done himself. As difficult as it is to sum up a life so well lived in just a few paragraphs, those close to him will remember James as a gentleman, a loving husband, a kind father, and a patient Grandaddy. He had a quick wit, but his humor was always tempered by his sweet disposition. He stayed active after retirement in the Gulf Retirees group, served on the Board of the Nottingham Oaks VIII Homeowners Association, traveled often to visit family and friends, and was the green thumb and chief mechanic at home. James was extremely well loved and he will be very truly missed. A Memorial Service celebrating James life will be held Saturday, February 6, 2016 at 1:30 PM at Dettling Funeral Home, 14094 Memorial Drive, Houston, TX 77079. A reception will follow the service in the Grand Room at Dettling Funeral Home. In lieu of flowers, please consider contributions in James memory to Hornsby Cemetery, 5611 Hwy 304, Rosanky, TX 78953.

The family of James Edward Upton created this Life Tributes page to make it easy to share your memories.

James Edward Upton, 85, of Houston, Texas, passed away on Saturday,...

Send flowers to the Upton family.