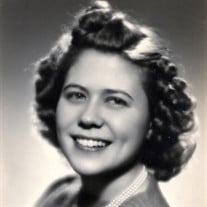 Jane Etling Dye, age 98, passed away peacefully on May 21, 2021. She was born August 16, 1922 in Hammond, Indiana and graduated from Catholic Central High School. She attended St. Mary’s of the Woods College in Terra Haute, Indiana for two years before transferring to the University of Illinois in the fall of 1942 where she was a member of Delta Gamma Sorority. Jane met the love of her life and future husband Richard W. “Dick” Dye the first week of school at Illinois on a blind date. By the end of the school year Dick and Jane knew they wanted to get married but like many couples decided to wait until after World War II; they were married June 12, 1946. After Dick completed law school at the University of Colorado, they settled in California before locating to Houston in 1963. Jane was a wonderful wife, mother, grandmother and friend. Affectionately named Gigi by her grandchildren, she was a very enthusiastic and energetic person regardless of what she was doing. She was a great hostess and a fantastic cook who could basically make anything from scratch. She was happiest supporting her children or grandchildren at a school or sporting event. Dick and Jane enjoyed travelling in their later years taking memorable trips to Asia, Africa, the Middle East and Europe. Jane also took each grandchild on a special trip individually when they were in their early teens. She was a 50-year member of the Houston Junior League and volunteered for many years at Spring Branch Hospital. Jane was preceded in death by her husband, Richard W. “Dick” Dye, parents Clifford A. and Mabel Schmal Etling; brother James Clifford Etling and his wife Jacqueline Harle Etling; and numerous aunts, uncles and cousins. She is survived by her daughter, Kathryn Dye Artz and her husband Ken of Corona del Mar, California; son Bob Dye and his wife Cindy of Houston, Texas; grandchildren Kevin Artz and his wife Christine of Newport Beach, California; Kelly Artz Tilton and her husband Ben of New York City; Steven Dye of Chicago, Illinois; Jennifer Dye Perry and her husband Adam of Houston, Texas; James Dye of Chicago, Illinois; and numerous nieces and nephews. The family would like to offer special thanks to Loritha LaRose and Nikoda Wyatt for their many years of loving care, kindness and friendship. A memorial service and interment will be held at a later date in Dick’s hometown of Macedonia, Iowa.

Jane Etling Dye, age 98, passed away peacefully on May 21, 2021. She was born August 16, 1922 in Hammond, Indiana and graduated from Catholic Central High School. She attended St. Mary&#8217;s of the Woods College in Terra Haute, Indiana for... View Obituary & Service Information

The family of Jane Etling Dye created this Life Tributes page to make it easy to share your memories.

Send flowers to the Dye family.