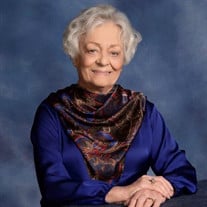 Janet Maria Lee, born January 28, 1934, went home to the Lord January 6, 2020. She was preceded in death by her parents, Alice & Edward Picone, and husband, Robert (Bob) Whittier Lee. Janet is survived by her children, Rob, Jennifer, and Tracy; brothers, Edward, David, Paul, and Stephen; son-in-law, Chase and numerous nieces and nephews. Janet was born in Cambridge, MA. She married Bob, the love of her life, on January 26, 1957. They were married for 57 years. In 1968, Janet moved to Houston with Bob as he began a job with GAI-GMX offshore drilling. She began her career as a real estate agent at Bering Realty then moved to Heritage Texas Properties, where she retired in 2012. Janet played an integral role in the parish life of St. John Vianney by planning parties and events with Bob. Those were the best days. One of her proudest achievements was being on the founding board of St. John XXIII High School in Katy, TX. In her retirement community, Tarrytowne Estates, she was often decorating, planning events, or talking with the staff members. Janet often worked with her hands, making flower arrangements, intricate bows, and cards. More than anything, Janet loved people. Sitting down with a glass of scotch and spending time in conversation with her friends and family was what made her the happiest. The Lee family will be present to receive friends on Monday, January 13, 2020 from 6 pm to 8 pm with a Vigil service beginning at 7 PM at Dettling Funeral Home, 14094 Memorial Drive, Houston, Texas 77079. The Funeral Mass will be held on Tuesday, January 14, 2020 at 10:30 am at St. John Vianney Catholic Church, 625 Nottingham Oaks Trail, Houston, Texas 77079, the Reverend R. Troy Gately, Celebrant. Burial will occur at a later date at the Massachusetts Veterans Memorial Cemetery in Winchendon, MA. Memorial Contributions may be made to St. John XXIII Catholic High School, 1800 W. Grand Parkway, Katy, Texas 77449.

The family of Janet Maria Lee created this Life Tributes page to make it easy to share your memories.

Send flowers to the Lee family.