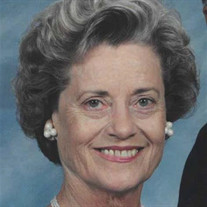 Wilma Jeanne Strickland Meyers, 81 years old, of Houston, TX passed away on February 12, 2016. Jeanne was born in Black Oak, AR on November 9, 1934 to William Archless and Rosetta Jane Strickland. She grew up on a farm in Arkansas surrounded by a big and loving family, the second youngest of thirteen children. She graduated from Monette High School and spent one year at the University of Arkansas before her sense of adventure urged her to move to Dallas, Texas where she worked as an X-ray technician. After a few years she took a job as a flight attendant. She loved travel and enjoyed recalling stories from this time in her life and passed this wanderlust on to her children and grandchildren. She concluded her airline career in 1961 when she met and married the love of her life, Wesley T Meyers Jr. Together they lived in Oklahoma City, Oklahoma, Jackson, Mississippi, New Orleans, Louisiana, Tulsa, Oklahoma and spent the last 35 years in Houston, Texas. Jeanne was a long time active member of St. John Vianney Catholic Church where she sang in the choir, worked in Joseph’s Coat, and coordinated rides for the sick and elderly parishioners who are unable to drive. She was an active member of the Women’s Club. Jeanne loved to sing, travel, play bridge, and exercise at Memorial Athletic Club. She was a gifted seamstress. Jeanne is preceded in death by her parents and beloved son (Bud) Wesley T. Meyers, III. She is also preceded by siblings, Eva, Alene, Myrtle, Velma, Evelyn, Ruth, Russell, James (Jimmy), Alvin, Glenn and Donald. She is survived by Wes, her loving husband of 54 years; daughter Leslie Meyers Roppolo (Stephen) and son Matthew William Meyers (Jennifer); grandchildren Sophie, Meg and Ellie Roppolo, Gwen and Annika Meyers. She is also survived by a sister, Marcile Williams and numerous loving nieces and nephews. The family would like to thank the staff at Memorial City Memorial Hermann Hospital, for their kindness and support. The Meyers family will be present to receive friends Tuesday, February 16, 2016 from 6:00 PM until 8:00 PM with a Holy Rosary being recited at 7:00 PM at Dettling Funeral Home, 14094 Memorial Dr., Houston, TX 77079. The Funeral Mass will commence Wednesday, February 17, 2016 at 10:30 AM at St. John Vianney Catholic Church, 625 Nottingham Oaks Trail, Houston, TX 77079. Visit www.DettlingFuneral.com to leave online tributes.

Wilma Jeanne Strickland Meyers, 81 years old, of Houston, TX passed away on February 12, 2016. Jeanne was born in Black Oak, AR on November 9, 1934 to William Archless and Rosetta Jane Strickland. She grew up on a farm in Arkansas surrounded... View Obituary & Service Information

The family of Jeanne Strickland Meyers created this Life Tributes page to make it easy to share your memories.

Send flowers to the Meyers family.