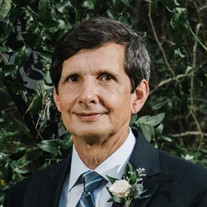 Jeffrey Martin Johnson died of cancer on May 25, 2021 in Houston, TX at the age of 65. Jeff was born March 4, 1956 in Fall River, Massachusetts, later moving to Glasgow Kentucky where he was raised. He earned his Bachelor of Science in Chemical Engineering from the University of Kentucky in 1978. Upon graduation, he accepted a position with Shell Oil Company in New Orleans, LA; remaining with the company for 37 years until his retirement in late 2015. He was based in both New Orleans and Houston over the years, ending his career in Houston where he remained after retirement. Jeff was a well-respected engineer known for his superior intellect and fact driven nature. He was generous with his time and experience, mentoring countless junior staff throughout his career. Jeff loved being in nature, enjoying hiking as well as leisurely walks. Over the years, he created many happy memories exploring the great outdoors with his wife and children. The state of Kentucky, the home of his youth and extended family, continued to have a strong gravitational pull throughout his life. Many a vacation day was spent visiting family and enjoying the natural beauty of the state. Jeff’s most cherished roles were as a son, brother, husband and father. He is survived by his wife of 33 years, Lisa Hanes Johnson; his son Ethan Andrew Johnson and his wife Kelsie of Houston TX; daughter Emily Elizabeth Johnson and her fiancé Michael Pratt of Dallas, TX; sister Cecilia Elizabeth Sisson and her husband Tom of Sedalia, KY; brothers Craig Arby Johnson and his wife Joanne of Falls of Rough, Ky; and Kim Edward Johnson and his wife Ann, of Emerald Isle, NC. He is preceded in death by his father Arby Nelson Johnson, mother Lois Webler Pirog and his brother Leslie Mark Johnson. A celebration of his life well-lived will be held at a future date. In lieu of flowers, the family asks that, if you wish, consider planting a tree in Jeff’s memory in a place of your choosing.

Jeffrey Martin Johnson died of cancer on May 25, 2021 in Houston, TX at the age of 65. Jeff was born March 4, 1956 in Fall River, Massachusetts, later moving to Glasgow Kentucky where he was raised. He earned his Bachelor of Science in Chemical... View Obituary & Service Information

The family of Jeffrey Martin Johnson created this Life Tributes page to make it easy to share your memories.

Send flowers to the Johnson family.